In Egypt, the biggest plastic polluter in the Middle East and Africa, young entrepreneurs are trying to transform the millions of tons of plastic that flood the Nile, the Mediterranean and open landfills.

The country of 104 million people – where 67% of waste is “not properly managed” according to the World Bank – has pledged to halve its consumption of single-use plastic by 2030.

But before that, young environmentalists and engineers decided to use plastic waste right away: the former take it from the waters of the Nile and the latter make bricks with it, a green alternative to cement and its heavy carbon footprint.

The 5.4 million tonnes of plastic waste produced each year in Egypt often ends up in illegal landfills that flow into the Nile and the Mediterranean, where it poisons aquatic wildlife.

A worker dumps a bucket of plastic waste into a workshop by startup ‘TileGreen’, where it is recycled into eco-friendly tiles used on outdoor sidewalks, in the industrial city of Ashir min Ramadan, about 60 kilometers east of the Egyptian capital, December 8, 2022. (Credit: Ahmed HASAN/AFP)

More than three-quarters of fish caught in Cairo, on Africa’s longest river, contain plastic microparticles, warns a study published in 2020.

Further north, in Alexandria, that figure is as high as 92%, according to researchers at the Egyptian Institute of Oceanography and Fisheries this year.

In Cairo, on the island of Qoursaya, in order to survive, fishermen began to fill their nets with plastic.

Hany Fawzy, project manager for VeryNile, a project supported by the Ministry of the Environment, buys “between ten and 12 tons of plastic a month” from 65 fishermen who collect and separate waste from their boats.

The plastic is then compressed and then recycled or incinerated as fuel at a cement plant in the south.

According to the OECD, less than 10% of plastic in the world is recycled, mainly due to the difficulty or cost of the process.

Many plastic products – and more particularly laminated flexible packaging such as crisps packets – are “composed of different layers of plastic and aluminum that are almost impossible to separate and therefore to recycle”, co-founder Khaled Raafat told AFP. . -up TileGreen.

“Most of the time this plastic with no or very little value ends up in landfills, incinerated or in our environment, our seas and our rivers”, adds his partner Amr Shalan. 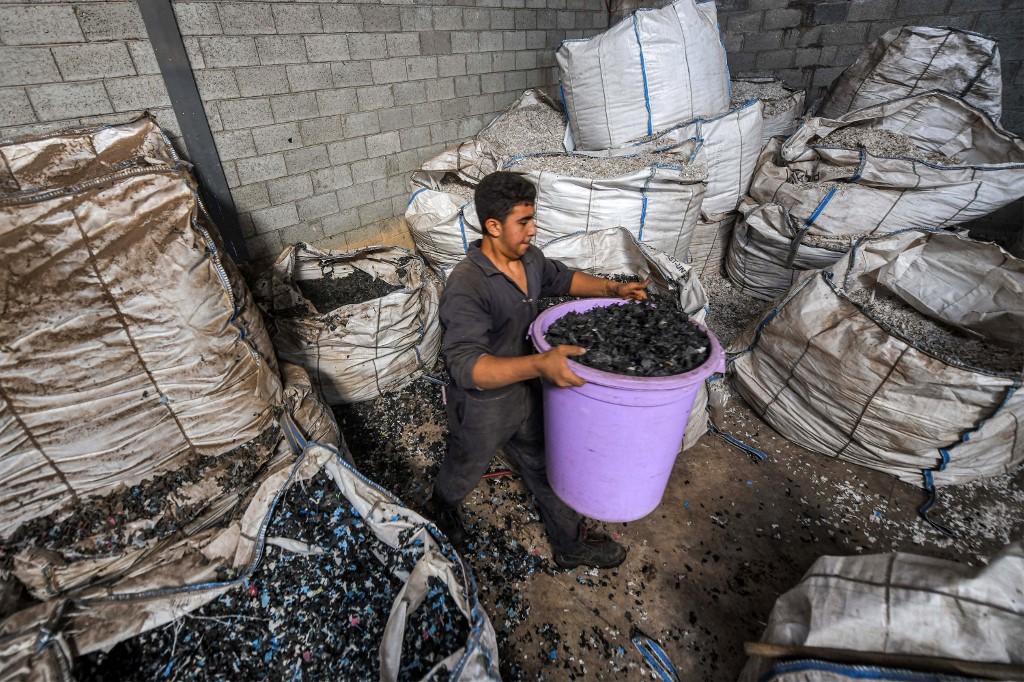 A worker carries a bucket of plastic waste to a workshop by startup ‘TileGreen’, where it is recycled into eco-friendly tiles used on outdoor sidewalks, in the industrial city of Ashir min Ramadan, about 60 kilometers east of the Egyptian capital, December 8, 2022. (Credit: Ahmed HASAN/AFP)

A drop in the ocean

Behind him, a shredder gobbles up plastic to spit it out in the form of dark bricks “twice as solid as concrete,” Rafaat boasts, throwing one to the ground.

“Only 11-15% of plastic waste is recycled in Egypt each year. We work with recycling companies and recover what they can’t use,” explains Shalan.

One brick, he says, is equivalent to 125 plastic bags. TileGreen has already produced 40,000 and aims to have recycled between three and five billion plastic bags by 2025. 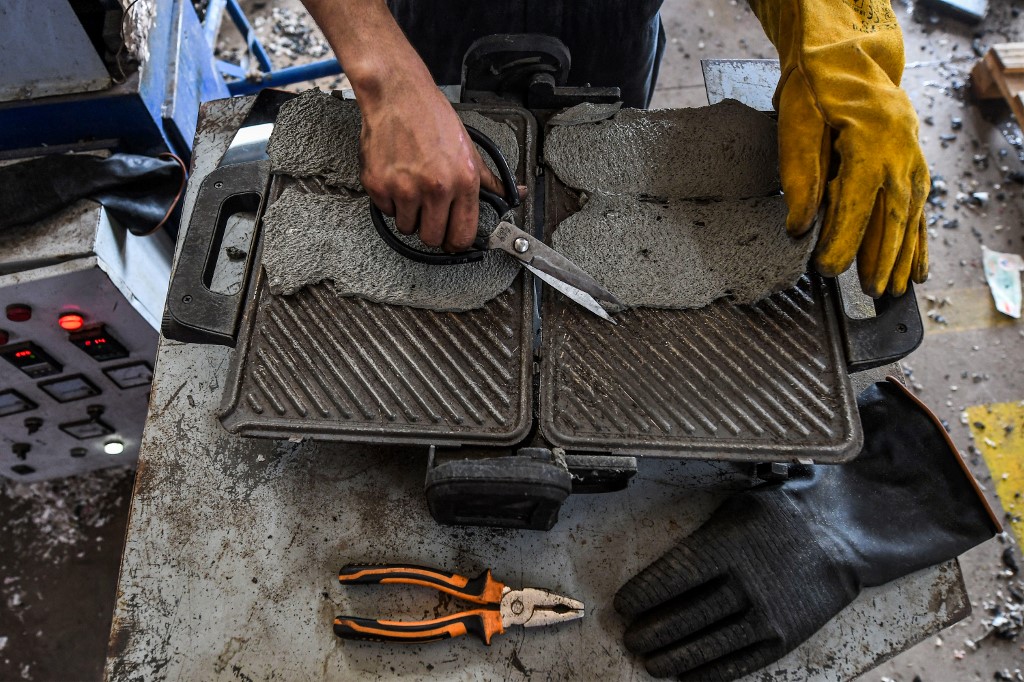 A worker shapes plastic waste in a workshop by start-up ‘TileGreen’, where it is recycled into eco-friendly tiles used on outdoor walkways, in the industrial town of Ashir min Ramadan, about 60 kilometers east of the Egyptian capital in December 8, 2022. (Credit: Ahmed HASAN/AFP)

But that will certainly still not be enough. According to the OECD, annual plastic production is expected to triple by 2060, to 1.2 billion tonnes.

At the same time, another number will double: that of 100 million tons of plastic waste not recycled or abandoned in nature each year.

“Plastic is not going away. With their initiatives, they created a market and saw that there was clearly a demand”, analyzes Mohamed Kamal, co-director of Greenish, which helped to create VeryNile.

“Anything that creates value from waste in Egypt is a step forward,” he insists. “But we stay on the surface and that doesn’t solve the basic problem.”

You are one of our faithful readers!

We are glad you read x items from Israeli times last month.

That’s what we work for every day: to provide discerning readers like you with relevant media coverage of Israel, the Middle East and the Jewish world. Unlike many other media, our content is accessible for free – no paywalls from the first paragraph. But our work is proving to be more and more expensive. That’s why we invite readers, who can and for whom Israeli times in French has become important, so support us by joining the Community of Israeli times in French. For the amount you choose, once a month or once a year, you too can contribute to this quality independent journalism and enjoy ad-free reading.