What if the energy coming from data centers was used to heat our homes instead of the planet? The recovery of waste heat released into the air and, more rarely, into water by data centers is one of the most promising ways to combat global warming. Everyone has seen that a computer constantly emits heat, which requires the presence of a ventilation system.

At the scale of a data center, the power emitted by microprocessors is proportional to the number of servers it hosts. It can be used in winter to heat community equipment (swimming pool, gym, school), offices, commercial areas or social housing.

In the current context of energy crisis, in a scenario of war in Ukraine, this alternative source of energy is far from trivial. According to a study by French start-up Greenly, the cloud is responsible for almost 0.5% of global CO2 emissions. With the explosion of digital uses and the number of data centers, that number could rise to 2% by 2030. 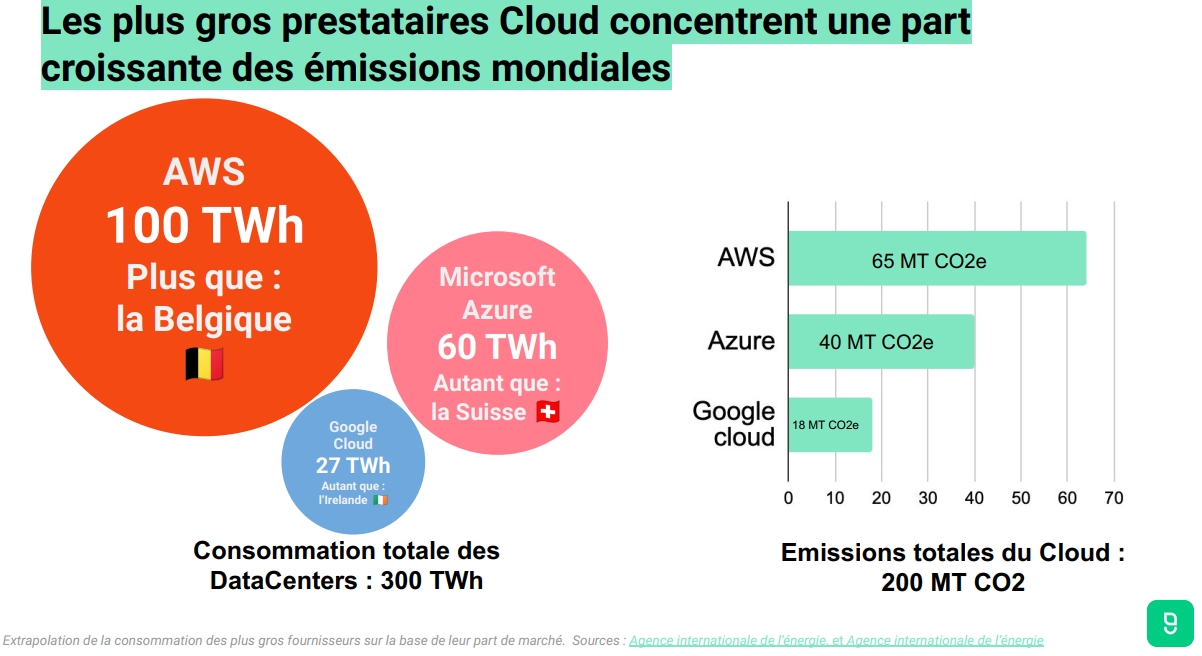 According to an article by street newspaper, Europe is at the forefront of data center waste energy recovery. To illustrate this finding, the American newspaper recalled the recent initiatives of GAFAM in the Old Continent.

“Last year, Amazon, Apple and Microsoft started to connect, or announced plans to connect, their main data centers to district heating systems in Ireland, Denmark and Finland. Likewise, Google said it was evaluating opportunities to recover heat from its European data centers.

Meta, Facebook’s parent company, has already taken the leap. Since 2020, it has been using excess heat from its local data center to heat the city of Odense, Denmark. Around 11,000 families should benefit next year. Apple has been working since 2017 with another Danish city, Viborg, on how to use the heat in its data center. This project should be completed in 2023.

Dalkia and Qarnot, pioneers in recovery

The GAFAMs are not the only innovators in the field. After connecting to Helsinki’s district heating, operator Equinix plans, according to the echoes, to heat up the aquatic center of Saint-Denis, in the Paris region. A way to enhance the numerous data centers in the Seine-Saint-Denis department.

This kind of feat is nothing new. The Natixis bank data center in Marne-la-Vallée has been heating the Val d’Europe intercity aquatic center for 10 years. A project initiated by Dalkia, a subsidiary of Veolia and EDF.

Also in France, Qarnot is a pioneer. Since its creation in 2010, this Ile-de-France start-up has provided both computing power and harnessing the energy emitted to heat offices and social housing. To this end, it markets a whole range of computer radiators and digital boilers.

The phenomenon can accelerate under regulatory pressure. According street newspaper, the European Union would finalize a directive on energy efficiency requiring operators to conduct feasibility studies on using excess energy from their data centers. ReUseHeat, an EU-funded project, is already promoting the reuse of waste heat.

At the same time, Member States introduced tax incentives. In France, the 2021-1485 law aimed at reducing the environmental footprint of digital technology, known as the “REEN law”, introduced a reduced rate for TICFE (domestic tax on final consumption of electricity). Data centers that comply with good practices in terms of ecodesign and energy efficiency can benefit from 2022.

Salvation can also come from self-regulation by market participants. 25 companies, including most cloud providers, and 17 associations from across Europe also signed a pact that aims to make EU data centers climate-neutral by 2030. Fatal energy recycling is one of the measures to achieve this , including the use of 100% renewable energy.