NASA’s unmanned Artemis I mission to the Moon last month represented a small step toward the eventual dream of sending humans to Mars and beyond, a goal that will require a giant leap forward in finding ways to establish and exploit the unique satellite’s resources. from the earth.

In 2024, the Artemis II project – joined by more than a dozen countries, including Israel – will take astronauts to the Moon, even without having landed there. And, if all goes according to plan, 2025 will see the first manned moon landing since Apollo 17 in 1972.

By the middle of the next decade, the National Aeronautics and Space Administration (NASA) plans to fill its first permanent camp with rotating research teams.

To make this possible, one of the main challenges will be extracting and separating the bound metals and oxygen through a process called molten regolith electrolysis (from start-up Helios), which uses a ground-fed reactor. It melts lunar soil at 1,600 degrees Celsius and then, through electrolysis, creates oxygen that is stored for use.

According to the government website, NASA and the US Department of Energy are working to promote space nuclear technologies. The website states that “Nuclear fission systems are reliable and can provide a continuous supply of energy regardless of location, available sunlight and other natural environmental conditions. A demonstration of such systems on the Moon would pave the way for long-term missions to the Moon and Mars.”

As an alternative, an American-born Israeli scholar has developed a project to equip the Moon with solar panels.

Emeritus Professor Jeffrey Gordon of the Department of Solar Energy and Environmental Physics at Ben Gurion University calculated that this solution would require six times less mass than the best nuclear option to deliver the same amount of energy.

He claims that his proposal would guarantee an uninterrupted supply of power to the oxygen production facilities 100% of the time, thanks to a sufficient number of panels exposed to the sun at all times.

Gordon published his project in the academic journal Renewable energy earlier this year and was later invited to speak at NASA’s John H. Glenn Research Center in Cleveland, Ohio.

“We discussed this and it was exciting,” Gordon said, explaining that the center’s solar researchers were competing with other scientists working toward a nuclear solution.

In the initial stage of human colonization of space, only small amounts of energy will be needed. NASA has already selected six companies to present their proposals, three based on solar energy and three using nuclear fission.

In the long term, though, NASA will need greater amounts of energy to extract water – which exists on the Moon in different states – and to extract metals from the lunar surface that will be used for lunar construction. oxygen, which constitutes about 45% of rocky deposits.

The research of Prof. Gordon began when he was contacted a few years ago by Israeli start-up Helios, which has designed a lunar reactor producing oxygen. via a technology that requires very high temperatures.

A joint funding request from the Israel Innovation Authority was unsuccessful, and the partnership ended – but not before Gordon sketched out his conceptual plan for a ring of solar panels on the Moon.

Professor Jeffrey Gordon in his laboratory at the Department of Solar Energy and Environmental Physics at Ben Gurion University. (Permission)

Oxygen extracted from lunar regolith will be used for human needs, but will be used primarily to fuel and refuel rockets and orbiting satellites.

Today, rockets need to be loaded with enough liquid oxygen and hydrogen to provide the thrust they need to go into space and back to Earth.

Currently, it costs about a million dollars for every kilogram of filler needed. Costs could be reduced if it were possible to supply oxygen to “lunar gas stations”. 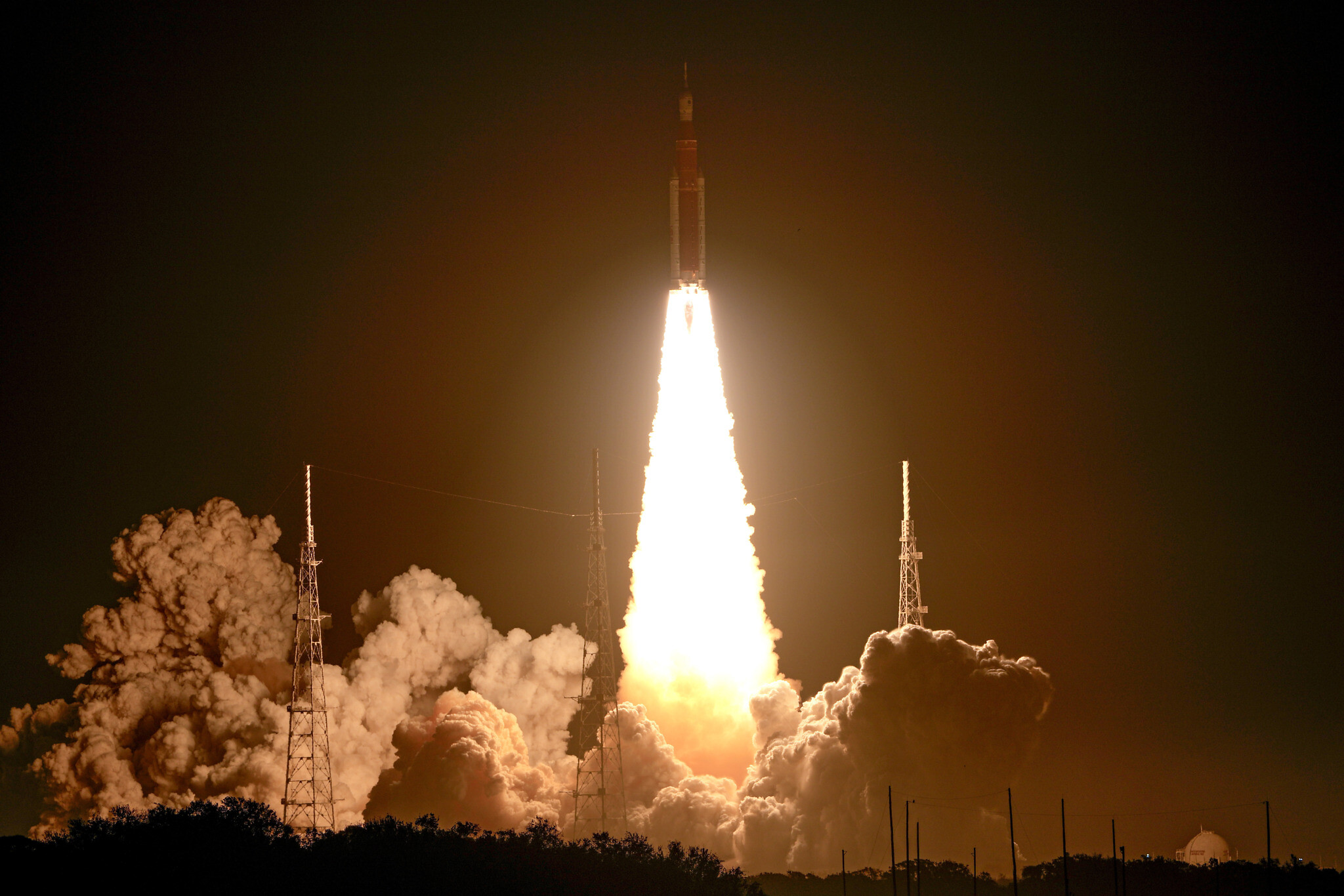 A NASA moon rocket lifts off from Launch Pad 39B at the Kennedy Space Center in Cape Canaveral, Florida, on November 16, 2022. The launch is the first test flight for the Artemis I program. (AP Photo/John Raoux)

Before starting, Prof. Gordon looked at three options, one of which was nuclear, although as a solar expert he was looking to develop a solar alternative. The reference was the generation of energy 24 hours a day.

The two solar options – generating solar energy when the sun is shining and storing it in batteries during periods of darkness, or building twice as many solar power plants as needed and operating each one for only half the time – turned out to be financially impossible. .

“I came up with a concept and made all the quantitative estimates that a space agency engineer would want to look at,” explained Gordon.

His plan calls for installing a ring of solar panels near one of the lunar poles; he used the North Pole as an illustration. They would not be located higher (or lower, in the case of the south pole) than latitude 88, in order to balance the advantage of a relatively short lunar circumference in these regions and the need to ensure that the shortest periods of daylight always meet each other. energy needs.

Oxygen factories would be located about 10 kilometers from a pole. This would maintain enough distance to prevent lunar dust, generated by mining, from covering the photovoltaic panels, keeping transmission lines relatively short.

“The transmission lines themselves would not require any insulation,” Professor Gordon pointed out, as the lunar soil provides natural electrical insulation.

But their biggest concern — and NASA’s — is how to sufficiently protect the humans who will operate the oxygen plants, among other tasks. “There is still no answer to that question,” he said.

Gordon said he had “no opinion” about the potential risks of building nuclear reactors on the Moon and noted that nuclear fuel could easily last 100,000 years even if the turbines and generators failed.

“The treatment of nuclear waste is a ‘good question'”, he admitted, adding that “there would be nuclear pollution”.

“Right now, I feel like NASA is planning nuclear reactors on the moon for the long term and pro-solar people are trying to persuade them otherwise or at least have both technologies,” he continued.

His own project is still “on the distant horizon”.

Helios, which last year signed a memorandum of understanding to cooperate with Japanese company Ispace Inc, hopes to send a small prototype of its lunar oxygen production facility to the Moon in 2025.

According to Jonathan Geifman, co-founder and CEO of Helios, the goal is to produce a few tens of grams of oxygen to demonstrate the validity of the concept. To do this, a battery will most likely be used.

Geifman said the ultimate goal is to produce 1,000 tons of oxygen a month, enough to refuel the SpaceX spacecraft. Fueled by liquid oxygen and liquid methane, the ship would be “the main source for the foreseeable future”.

Israel launched its own moon landing capsule, Beresheet, in 2019. Due to a technical issue, the spacecraft crashed during landing.

The first Israeli astronaut, Ilan Ramon, died in 2003 in the disintegration of the space shuttle Columbia, on its return to the atmosphere. All seven crew on board died.