Startup Fungible DPU was reportedly sold to Microsoft for $190 million, despite raising over $300 million since its incorporation in 2015, according to SemiAnalysis. Consultant Dylan Patel, who leaked the information, said: Fungible sought funding from various sources and even tried to sell Meta, but ultimately failed to gain traction. Microsoft initially considered a custom silicon deal with Fungible, but… instead decided to acquire the company, employees and intellectual property for a low price.

Fungible, founded in 2015 by Pradeep Sindhu and Bertrand Serlet, is headquartered in Santa Clara, California. Both founders worked at Xerox PARC, with Sindhu becoming founding CEO and president of Juniper Networks, then vice president, CTO and chief scientist. He left the company to create Fungible and served as CEO. The company seemed increasingly struggling after laying off employees in August and scaling back its product lineup in November, reversing its composite infrastructure ambitions to focus on DPU-enhanced NVMe/TCP storage arrays. 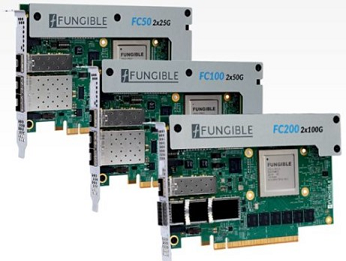 Modern data centers use a scale-out architecture to take advantage of volume savings and simplify deployment. While this approach has many advantages, there are also pervasive compute, storage, and networking inefficiencies that limit its broad applicability in today’s demanding environments.

The Fungible DPU was invented to address the inefficiencies of scalable data centers: inefficiently running data-centric computations on server nodes and inefficiently exchanging data between server nodes, while strengthening reliability and security. . Based on this groundbreaking invention, Fungible enables the establishment of a scalable, high-performance hyper-disaggregated infrastructure.

Serlet became Apple’s senior vice president of software engineering and founded Upthere, a consumer cloud storage company, which was acquired by Western Digital in 2017. He does not hold a public executive role at Fungible. He and Sindhu designed and built a Data Processing Unit (DPU) chip to offload data center east-west traffic, which is mainly for storage, networking and security, from the x86 host server processors, which allows less them to execute more application code.

They raised more than $300 million in seed funding and two rounds of venture capital in 2019 to support hardware, software and business development. The DPU was used to frontend and control a flash storage JBOD, the FS1600 storage node, with a corresponding version on the host servers. But the founders of Fungible envisioned a larger market – based on a disaggregated data center controlled by the DPU.

Intel has won some hyperscale DPU customers, and AMD’s Thinking has also established a buyer list, as well as support for Arm processor cores. Nvidia has created an ecosystem pattern with major player VMware, which provides its software running on BlueField. Fungible’s CPU was proprietary and getting software on it was not easy compared to Arm’s CPU targets.

As a result, Fungible reduced sales of the FS1600 storage product as Sindhu and the board tried to sell the company. Then came Microsoft, with its need for efficient datacenters for the Azure cloud. We understand that Redmond is not interested in selling Fungible’s kit to external customers.

Microsoft’s acquisition of Fungible would not be good news for everyone. Microsoft is already the subject of a complaint filed by the Federal Trade Commission (FTC) in connection with the acquisition of Activision Blizzard. In said complaint, the FTC points to Microsoft’s acquisition history and alleges in its complaint that the settlement would allow Microsoft to remove competitors from its Xbox game consoles and fast-growing cloud gaming and subscription content.

According to Reuters, although Microsoft’s acquisition of Activision is not yet complete and is threatened by various regulators around the world, including the FTC, Microsoft is considering buying Netflix in 2023.

The speed of startups is very important for their growth. This is even more true for technology-based startups. The problem is that when industrial age companies acquire tech startups, they turn them into bureaucracy. The number of people involved in decision making becomes very large. Many people are consulted before a decision is made. This undermines the speed that is essential to a startup’s success.

In the absence of other potential suitors and due to dwindling venture capital funding, Fungible management would have accepted a lower offer from Microsoft than it would have liked.

Are you for or against the acquisition of start-ups by BigTech?

Is Microsoft’s acquisition of Fungible a good deal or a bad deal?

Microsoft’s response to the complaint filed by the FTC to block Microsoft’s acquisition of Activision Blizzard, in a 37-page document, Microsoft explains its motivations for its acquisition