Russian private company Sestroretsky Arms Factory has developed Borshchevik, a tool designed to find the direction of Starlink terminals in operation. According to the company, the technology makes it possible to locate the location of the terminal at a distance of 10 km in a 180-degree sector, with an error of no more than 60 meters. The time to locate a point would not exceed 15 minutes. The manufacturer adds that the location data of the Starlink terminals is displayed through a modern graphical interface with the ability to connect topographic maps of the region. The company is preparing to test the system soon in Ukraine.

Elon Musk, CEO of SpaceX, responded to a request for Internet access via satellite and Starlink terminals from a Ukrainian official in the early days of the Russian invasion of Ukraine, to prevent the subsequent destruction of the country’s broadband infrastructure. Since then, SpaceX has provided satellite internet and terminals to Ukraine, spending the $100 million Musk says he wants to spend on the service this year alone. SpaceX recently asked the Pentagon to foot the bill for 2023, saying the company could not fund Starlink internet service to Ukraine indefinitely.

In September, Musk’s rocket company sent a letter to the Pentagon saying it could no longer continue funding the Starlink service as it had. The letter also asked the Pentagon to provide funding for the Ukrainian government and military use of Starlink, which SpaceX said would cost more than $120 million over the remainder of the year and could cost nearly $400 million over the next 12 months. We cannot make donations of new terminals to Ukraine or finance existing terminals for an indefinite period,” the letter said. 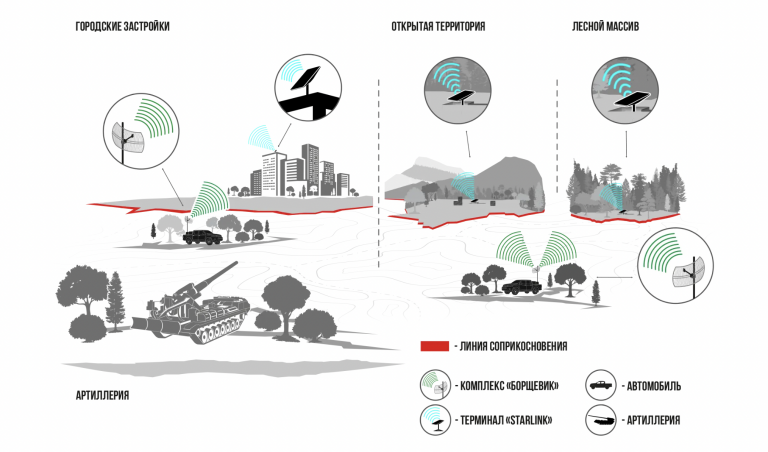 As Ukraine increasingly uses Starlink satellite internet service for military purposes, Musk has expressed concern that SpaceX could now be a target for Russian cyberattacks. Furthermore, some Russian figures have demanded that aerospace forces take down the Starlink satellites serving Ukraine, and some Russian officials have also issued threats about this. Earlier this month, the Russian company Sestroretsk Arms Factory published a website showcasing the Borshchevik or “cradle” system, designed to locate Starlink antennas at a distance of up to 10 km (6.2 miles).

According to information on the company’s website, it takes no more than 15 minutes to find a direction and calculate the location of a Starlink subscriber device with an accuracy of 60m using biangulation algorithms. Sestroretsk adds that the complex can be mounted on the chassis of a vehicle, which ensures tactical use at the front. A small power source or the vehicle’s power system provides the complex with autonomy. Complex components can be covered with various camouflage patterns, including those that reflect infrared light (infrared radiation).

With the ability to link topographic maps of the region to aid orientation, the company says processing of data received at Starlink terminal locations is done in a contemporary GUI created using UI/UX methodology. On its website, Sestroretsk featured a graphic showing that the Borshchevik system can also help Russian artillery locate a Starlink antenna in an urban area, in a more open outdoor environment and in a forest. Another image shows the system deployed via a large antenna above a Russian Humvee.

However, it is unclear how the Borshchevik system actually works or if it is effective. News of this technology was posted on a Telegram channel called “Reverse Side of the Medal”, which appears to be closely associated with the Russian military, including the Wagner paramilitary group. The user behind the channel said he plans to test the Borshchevik system on the front lines of the current war between Russia and Ukraine. It is also unclear to what extent the potential deployment of such Starlink terminal detection radar could affect the extent of SpaceX’s presence in Ukraine. 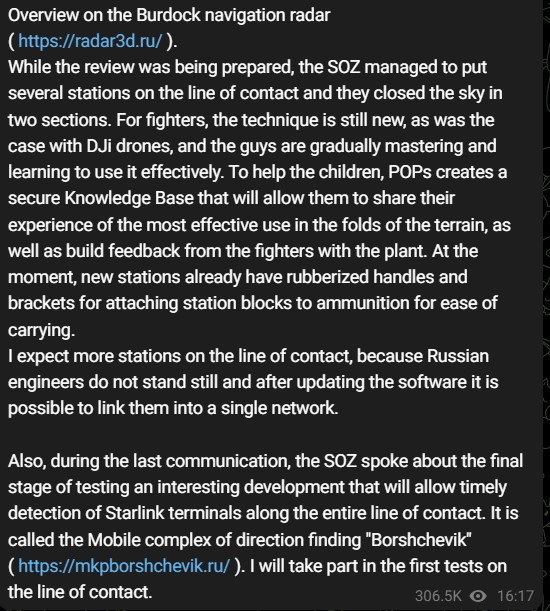 Whatever the details, it’s clear that the Kremlin is not a fan of Starlink. Musk’s satellite internet system brought broadband to war-torn areas of Ukraine, while Ukrainian soldiers used Starlink in the field as a communication tool and even to control drones. As a result, Russia has issued veiled threats of “retaliation” against the Starlink network for aiding the Ukrainian military. In March, SpaceX’s CEO also warned Ukrainians living in war zones to avoid placing Starlink satellite dishes in plain sight.

After inviting the Pentagon to foot the bill for service provided by Starlink Ukraine, Musk reversed the decision in mid-October, saying his rocket company should continue to subsidize its internet service in the country. Musk’s comment on the issue of support for the Starlink internet service in Ukraine came days after he clashed with some Ukrainian officials on Twitter, which he now owns. Indeed, Musk angered Ukrainians with a proposal to end the war against Russia in their country, which included ceding some territory.

Musk said that in asking the Pentagon to pay Starlink’s account in Ukraine, he was following the advice of a Ukrainian diplomat who responded to the peace plan he proposed earlier this month with abusive language. Ukraine’s outgoing ambassador to Germany, Andrij Melnyk, responded on Twitter further to Musk’s peace plan to end the Ukraine-Russia conflict by saying, “Fuck you” is my very diplomatic response to you @elonmusk. Asked why the letter was sent to the Pentagon, Musk replied: “We’re just following your recommendation.”

Sources: The Borshchevik Detection System, Back of Medal Telegram Channel

What do you think of the Russian Starlink terminal detection system?

If this system is effective, what impact could it have on Ukrainian troop communications?

Elon Musk said on Saturday that his rocket company SpaceX would continue to subsidize its Starlink internet service in Ukraine, citing the need for “good deeds”.

The Starlink terminals promised by Elon Musk have arrived in Ukraine, as confirmed by the country’s digital minister amid a Russian military operation that is disrupting the Internet

China deeply alarmed by Starlink’s potential to aid the US military in its total mastery of space, potential further revealed during war in Ukraine