The day after the Black Friday promotions, this Saturday, November 26, activists blocked access to the local Amazon warehouse in Longvic for a few hours.

Description and course of action:

This Saturday, November 26, on the occasion of Black Friday week, more than 60 rebels from the non-violent civil disobedience movement “Extinction Rebellion” joined forces to denounce the absurdity of the country’s anti-social and anti-ecological economic model. American giant Amazon. To do this, they were able to block trucks entering and leaving the Amazon warehouse in Longvic using blocking equipment placed at the three entrances to the warehouse. The activists did not, however, prevent the departure of employees’ personal vehicles.

Starting at 9:45 am, this lockdown allowed time for discussions with employees, who, despite some tensions at the start of the day, quickly showed some of their good humor and their support for the action.

At 1:30 pm, the police arrived at the scene and finally managed to clear one of the entrances, attacking some activists from the collective. We regret that this 1h30 intervention could not be done without violence, while the “Extinction Rebellion” collective is strictly opposed to physical and verbal violence.

The collective later decided in a general assembly to lift the blockade at 4 pm. In parallel with the blockade, a “disarmament” action was carried out by our collective: We deflated the tires of 25 delivery vans before notifying the Amazon administration about our act. However, this led to more tire damage than expected. This was not our objective and we apologize to the subcontractor for the inconvenience this degradation may have caused.

Why Amazon and Black Friday

This action aims to remind everyone that Black Friday contributes to the rise of electronic commerce, which the giant Amazon feeds with impunity, pretending to be ecologically aware. It is an important player in the system that drives excessive consumption and feeds a society that is totally disposable. Amazon is one of the largest distributors in the world and reveals its notoriety by diversifying its activities such as cloud rental, video streaming, home automation, food, printing… The company has benefited greatly during the pandemic and continues to abuse it. Its meteoric growth in recent years is made possible by massive tax evasion, cruel lack of transparency, encouragement of excessive consumption, greenhouse gas emissions, mistreatment of employees and the destruction of local jobs. Amazon places itself above all rules and all good customs: in the case of its activity in France, for example, to get rid of French tax laws, it bills a large part of its services to other countries, in particular to the Luxembourg known for its tax advantages.

The health crisis has benefited it in every way: the general confinement of 2020 resulted in revenues of 88.9 billion dollars, an increase of 40% compared to the previous year. The company booked $5.2 billion amid a health crisis, when many local businesses failed and had to go out of business.

Harmful working conditions with a very fast pace, as well as repeated sanctions, affect employees physically and mentally. About 3 work accidents a day were declared by Amazon France Logistique. 44% of Amazon’s total workforce is part-time, a number that rises to 64% in certain cases of labor needs. The great need for fluidity, especially during the Black Friday and Christmas periods, imposes an intense pace, which is the cause of many health problems: intense stress, exhaustion, musculoskeletal disorders…

This need for moldable workers manifests itself in a dehumanization of robot-managed workers. Hypermechanization and hypercomputing erase all reflection and humanity with tracking to the stroke and to the nearest second. All this leads to aberrant situations with, for example, employees forced to urinate in bottles
(Fact recognized by Amazon).

Amazon plans to cut 11,000 jobs in the coming months. We are far from the investment promised for employees…

Disrespect for workers, tax evasion, market monopolization… What about the environment then?

Stimulating demand with price cuts, the multinational contributes to overproduction and increases its supremacy while destroying the planet. The absurdity of exponentially increasing storage costs for unsold items offers the only solution for market sellers to pay for product destruction. Solution they don’t hesitate to choose, especially those whose return costs become prohibitive and unprofitable. Amazon, therefore, is not reluctant to destroy new and overpackaged products. Over 3 million items were destroyed in January 2019 in a UK warehouse. The leader in online sales then practices mass waste and maintains the society of everything immediate and everything disposable. In terms of energy, in 2018 Amazon’s data centers would have consumed 198 TWh, or 1% of the world’s electricity, more than consumption in Thailand, Poland or Egypt. Its carbon footprint increased by almost 40% between 2019 and 2021. The e-commerce giant announced in January 2021 the purchase of eleven Boeing 767-300s from Delta and WestJet, which will be refurbished into cargo planes. The aviation sector accounts for between 6 and 7% of greenhouse gas emissions, which play an important role in climate change. How can Amazon make us believe in a neutral carbon footprint by 2040?

In an attempt to hide this damning observation, Amazon plays with ecological offsets and greenwashing to reduce the effects of its ecological footprint and its social devastation: investment in reforestation, promotion of its own electric vehicles, development of CO2 capture technology.

Our demands through this action:

We demand that:
– That Amazon pays its fair share of corporate taxes. It must be prevented from artificially transferring its profits to tax havens. Unitary taxation would be an effective tool to end this form of tax evasion.
– That Amazon refund the astronomical sums linked to its VAT fraud and that a VAT deduction system be instituted.
– The introduction of a tax proportional to the carbon footprint of each product purchased.
– A moratorium on e-commerce warehouses, to prevent Amazon from building new warehouses in France.
– That all unsold items are donated and no longer destroyed.
– That the government financially support the sector of second life objects (Electronics, Clothing, objects of all kinds, etc.).

In the face of extinction, rebellion!
Extinction Rebellion Dijon 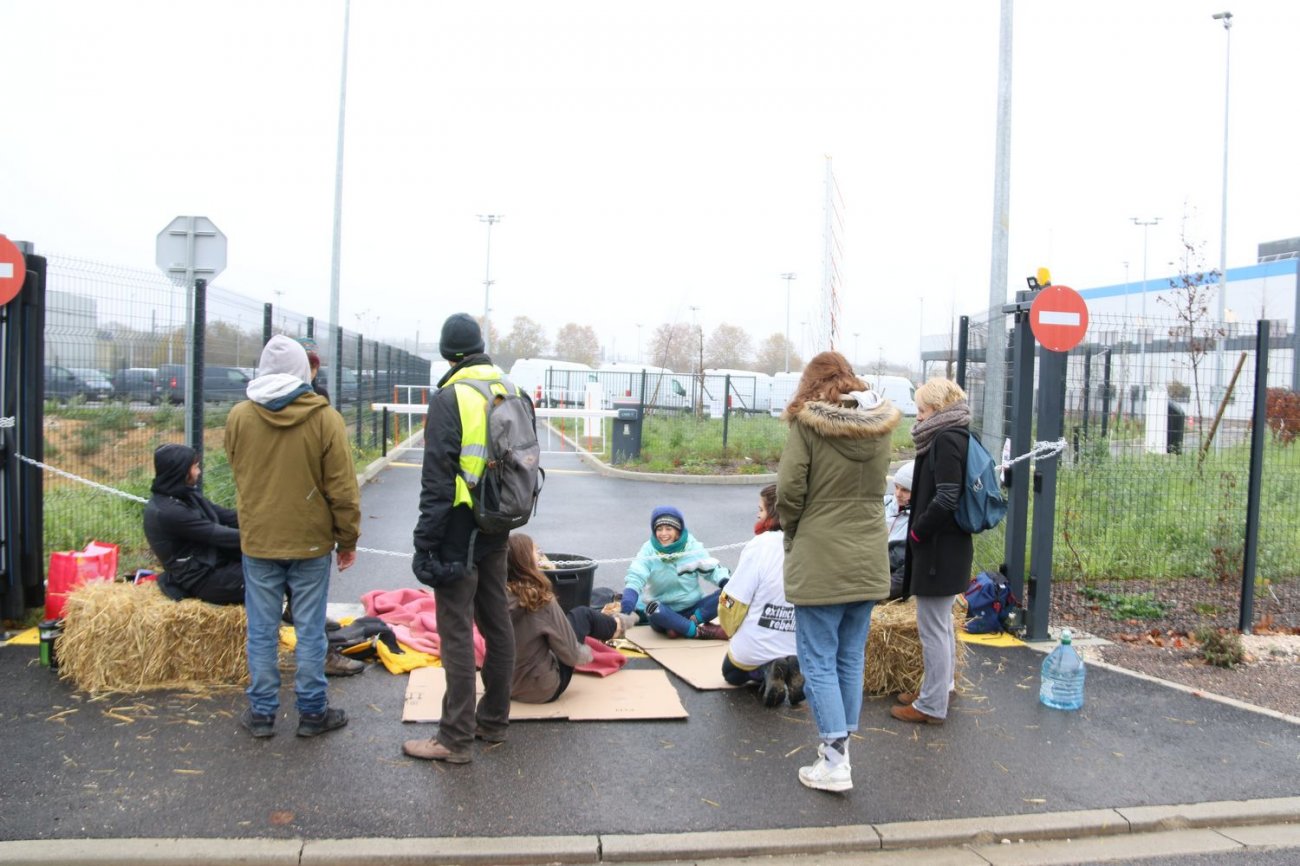 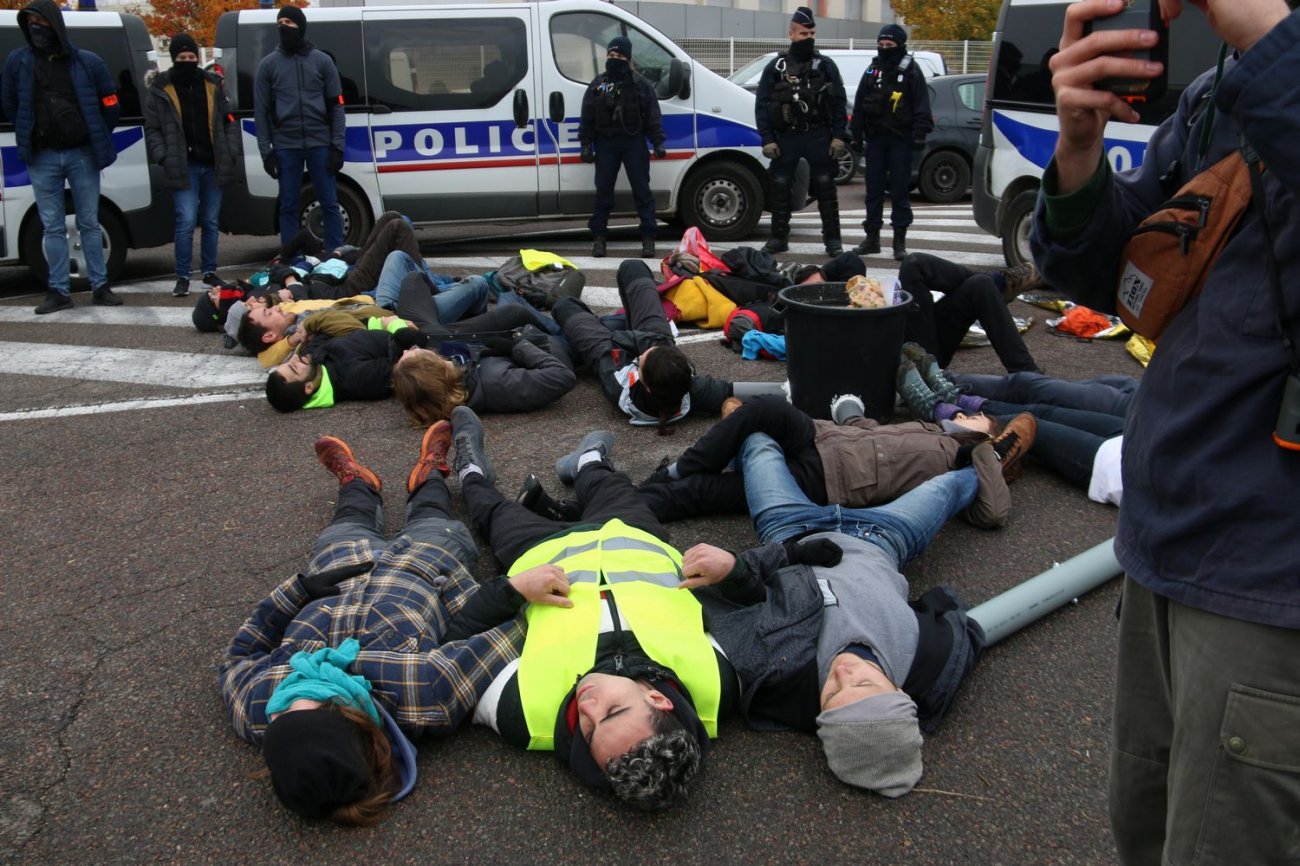