Traveling long distances with an electric car is perfectly possible. If you plan your stops, it is even possible not to waste much time: in fact, in recent years the network of fast charging stations has improved considerably in our country and along the main European roads. However, there are still areas in our neighboring countries where fast charging stations are quite far apart, which can be a challenge when traveling long distances.

know how to make choices

This test took us to the plains of northeastern France, namely Picardy and Upper Normandy. We had taken the necessary precautions, starting with choosing the car. The Renault Mégane E-tech Electric is available with two batteries: 40 or 60 kWh. Of course, we chose this last option whose autonomy promises 454 km according to the WLTP cycle. This range is, of course, greatly reduced on the motorway with passengers and luggage, but it is still sufficient to cover long journeys. 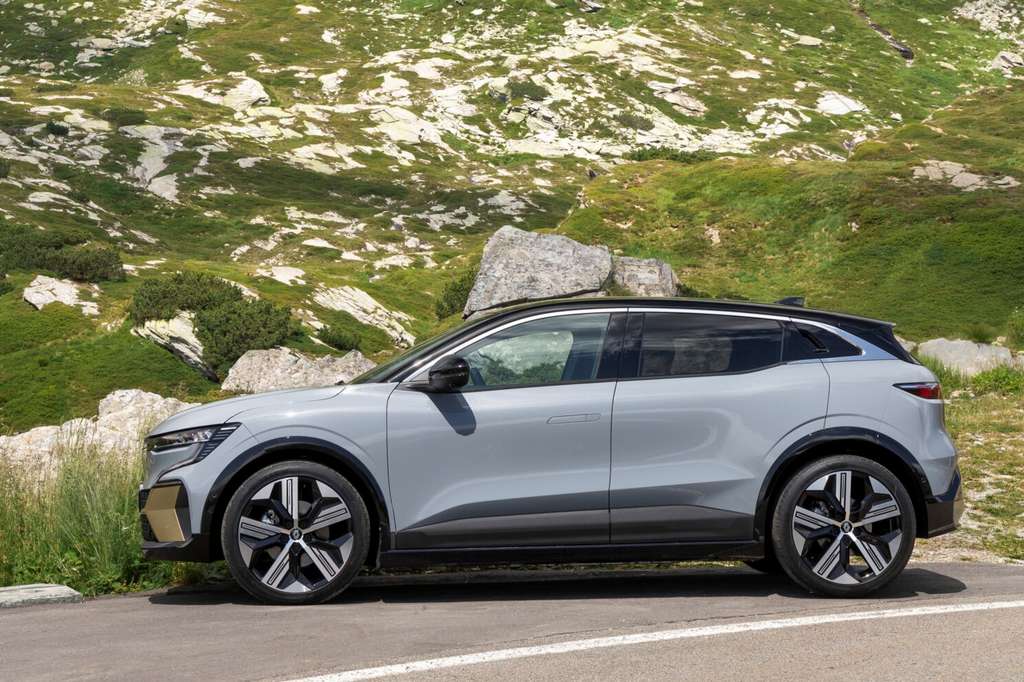 We also opted for a model with the most efficient charger. In fact, Renault offers several types of on-board chargers: as standard, the Mégane E-Tech Electric only has a 7 kW charger, while some versions can digest 22 kW. The DC fast charger (standard on more advanced versions, but optional on basic 85kW models) can handle 130kW. It’s not a benchmark in this segment, but it allows for a quick recharge nonetheless. 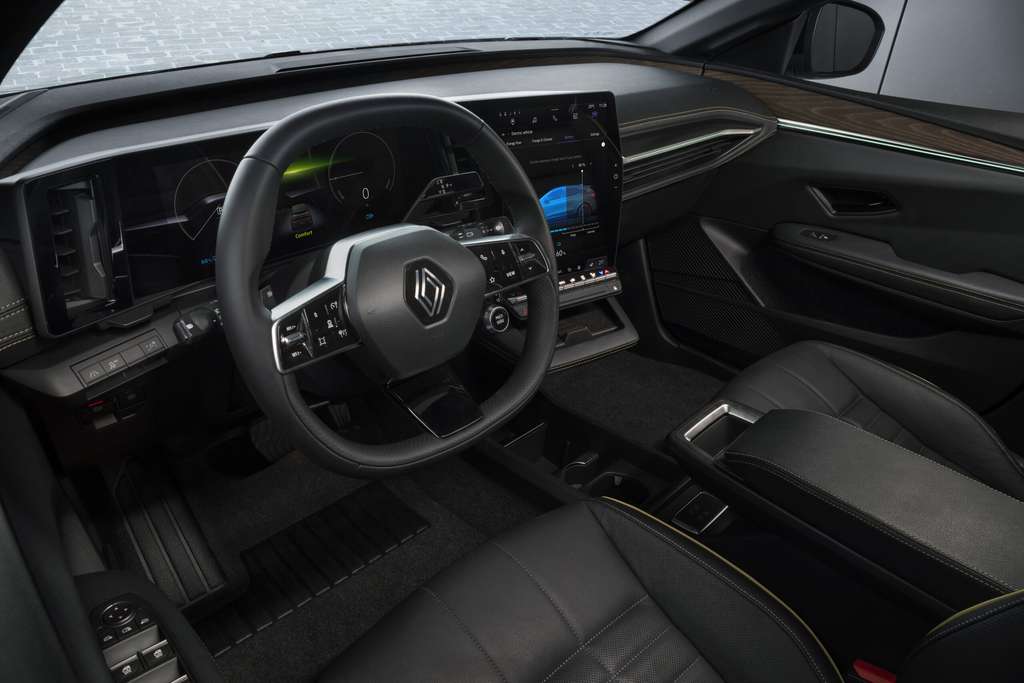 Passengers were impressed with the look and finish of the Mégane! The golden “blade” of the front bumper of the “Iconic” version, however, leaves them relatively perplexed. On the other hand, the presentation of the interior only received praise! However, the same cannot be said of the trunk: enough for luggage, the latter does not have space dedicated to charging cables which are therefore placed above the luggage… Not practical!

With the car loaded, we started near Hasselt with a range of just under 350km, 100km less than the range promised by the WLTP standard. This figure can be explained by the long motorway trip the day before, and perhaps also in part by the beautiful 19-inch rims of this “Iconic” version, whose 235/55 tires are quite robust. An energy-intensive choice that allows you to exploit the full potential of the Mégane’s 160 kW (220 hp). This power, combined with the silence of the electric propulsion, was much appreciated by the occupants.

Equipped with the Mégane infotainment system developed in collaboration with Google, the Chargemap app and charging cards from Bluecorner and EDI, we opted for a first stop around 220 km after departure. It was a fast charging station located in the parking lot of a Carrefour hypermarket in the city of Denain, in northern France, a few steps from the production plant of our Mégane E-Tech Electrique. , located in Douai. However, upon arrival, the charging station turns out to be out of order due to work, although it was indicated as “available” by the app. This is quite annoying, especially since it’s not an isolated case! In fact, we encountered a lot of problems with the French charging network, which seems to be managed rather haphazardly. 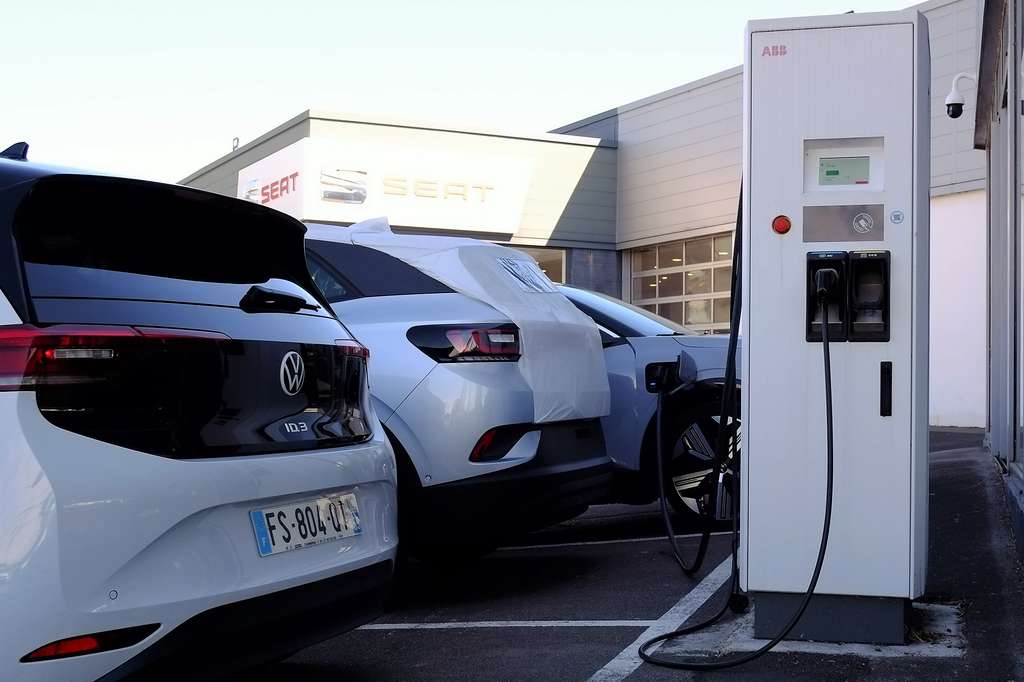 Led by a right foot perhaps a little too enthusiastic, the Mégane saw its range reduced to 120 km… Given the route that offered few possibilities for fast charging, we went in search of another fast charger nearby. The choice fell on a Lidl fast charger in Cambrai, about twenty kilometers away. When we arrived the station was busy and we had to wait about 20 minutes just to find out. chargers. We would have been happy to opt for a more powerful pay station, but unfortunately we had no choice! So we turned to another charging station: the 50 kW DC fast charger from the VW dealership in Cambrai. Luckily we were on a weekday and arrived during garage opening hours. An ID.3 and an ID.4 were parked at the terminals without recharging, but luckily the cable was long enough to allow the connection.

As we had already wasted a lot of time and there was nothing to do near the garage, we decided to charge up to about 80%. Anyway, after this point, the charging power goes down. The next charging station, located 250 km away, was the Ionity station in Bolleville. Traveling this distance seemed too ambitious to us, so we stopped for lunch along the way. During lunch we were able to use the 22 kW charger from a local Renault garage. This terminal was not compatible with public charging cards, but only with a card from the garage itself. The price ? €6 for half an hour or €25 for 3 hours. “Our” Renault, therefore, charged there, next to the demo of the Mégane from the garage. After a conversation about our experience with the Megane and the vicissitudes of loading on the road, the dealership waived our loading load and we hit the road again with a pat on the back, along with “courage”! 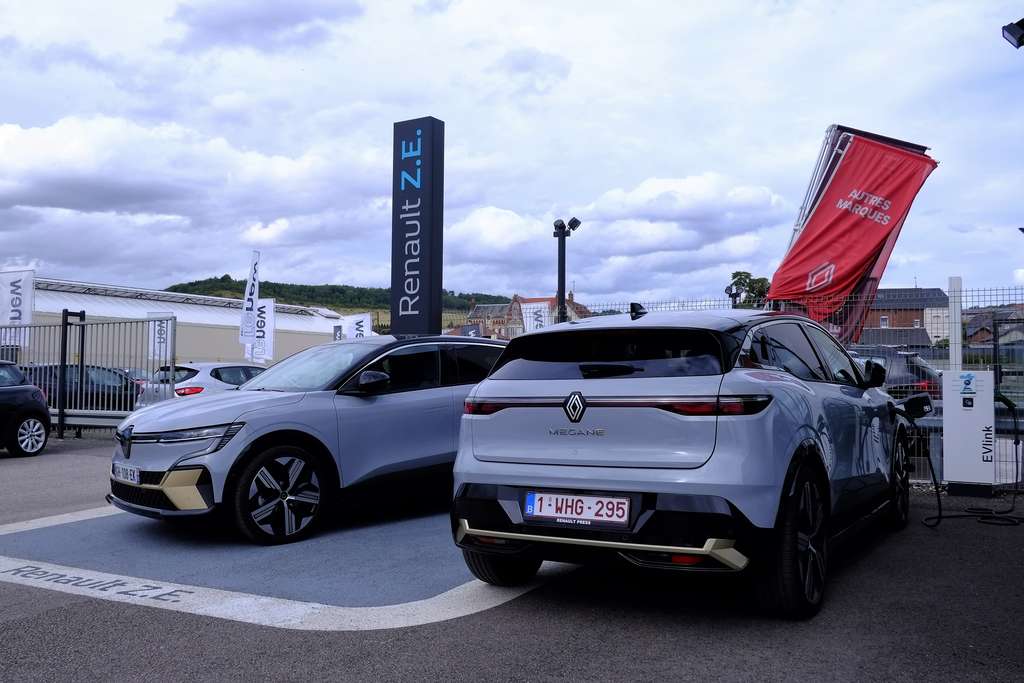 This 30-minute stop will have increased our range by about 60 km. Along the way, we stopped at an Ionity station for a quick recharge. Here the Mégane almost reaches its maximum charge capacity of 130 kW: after 10 minutes we have enough battery reserve to reach our final destination. 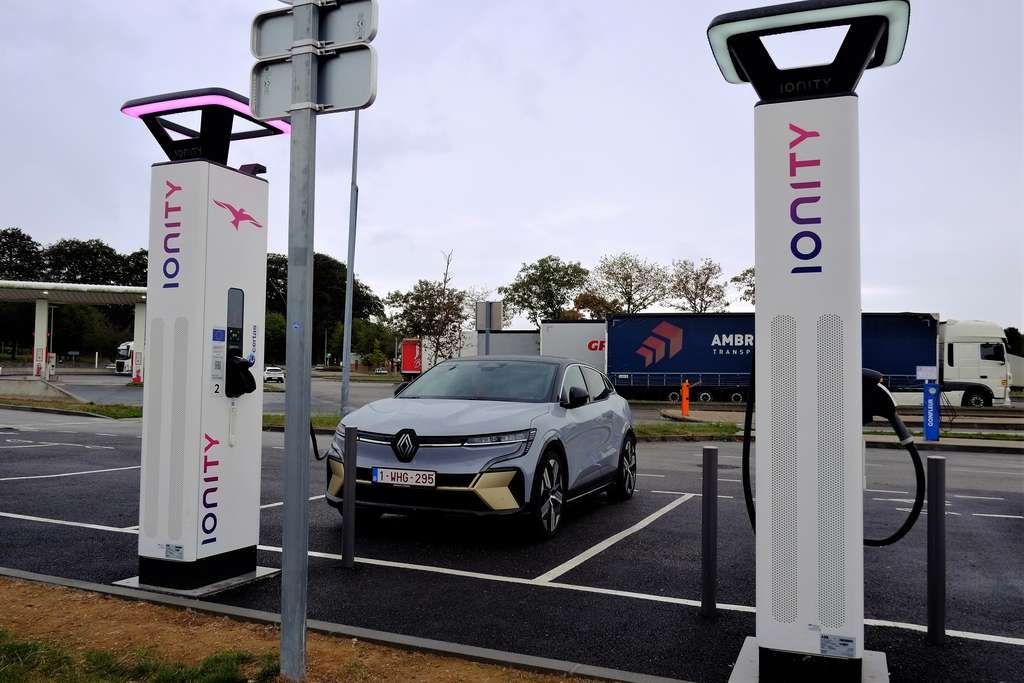 Upon arrival, the village’s only charging station proves to be incompatible with our charging cards, which, however, are widely accepted. Obviously, this beach resort, which is very popular with tourists, doesn’t seem to really want to help them, despite the growing number of holidaymakers using electric vehicles. Therefore, we had to connect to the French department’s website via a QR code to start a charging session, paying by the minute with a bank card. 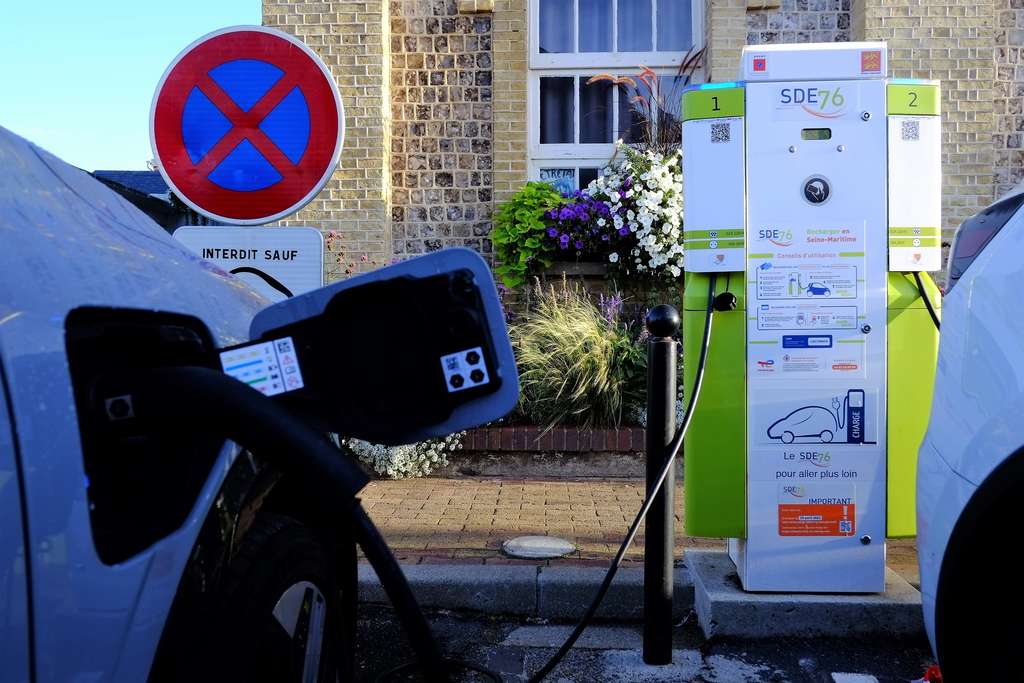 This procedure is quite tedious, but thanks to the 22 kW on-board charger of our Mégane and the charging station of the same power, we inject around 35 kWh into the battery in just under two hours, for the paltry value of 3, € 65. ..or less than 10 cents per kWh. Damn good news! On the way back, always on weekdays and during business hours, we again chose 2 dealerships to recharge, a Nissan garage and the VW dealership in Cambrai, with our recharge card being accepted every time. 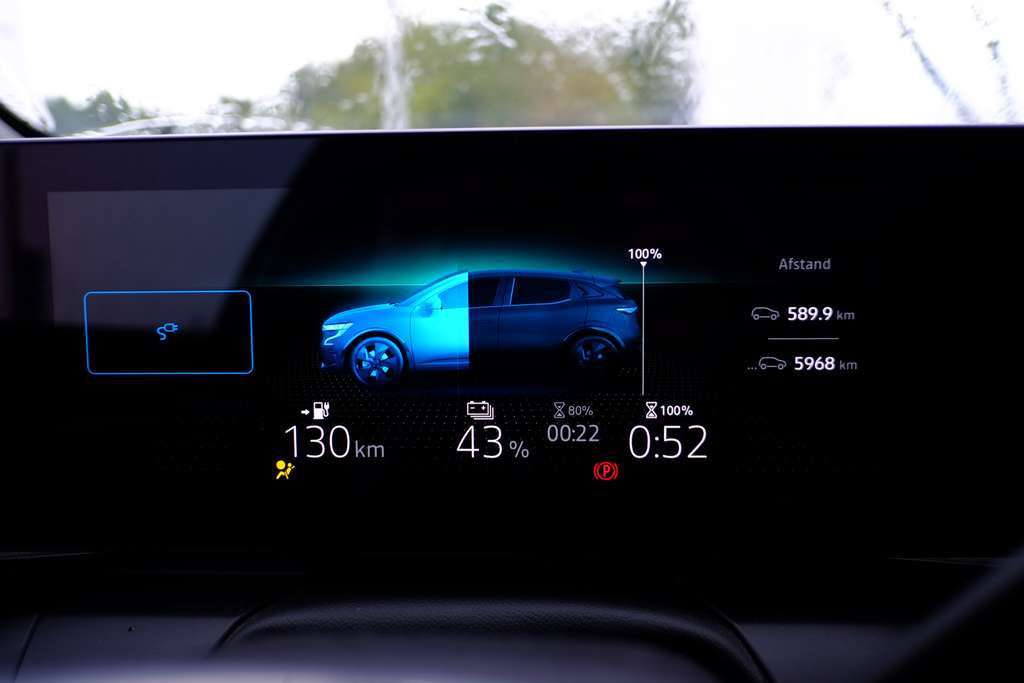 There’s a lot of work left!

In conclusion, long journeys aboard the new Mégane E-Tech Electric are perfectly possible… even if your home country is not the ideal destination. Without an open Ionity network or Tesla Superchargers (rare or non-existent along our route), you are dependent on a French charging network that is quite unpredictable, inaccessible or complicated in its payment procedures. There is still work to be done for an accessible network with charging points every 60 km, as Europe wants. The Mégane, on the other hand, behaves perfectly on the road. Due to the load and higher speeds on French motorways, average consumption was around 17.5 kWh/100 km. A less economical result than expected, but we still wanted a range of around 350 km. 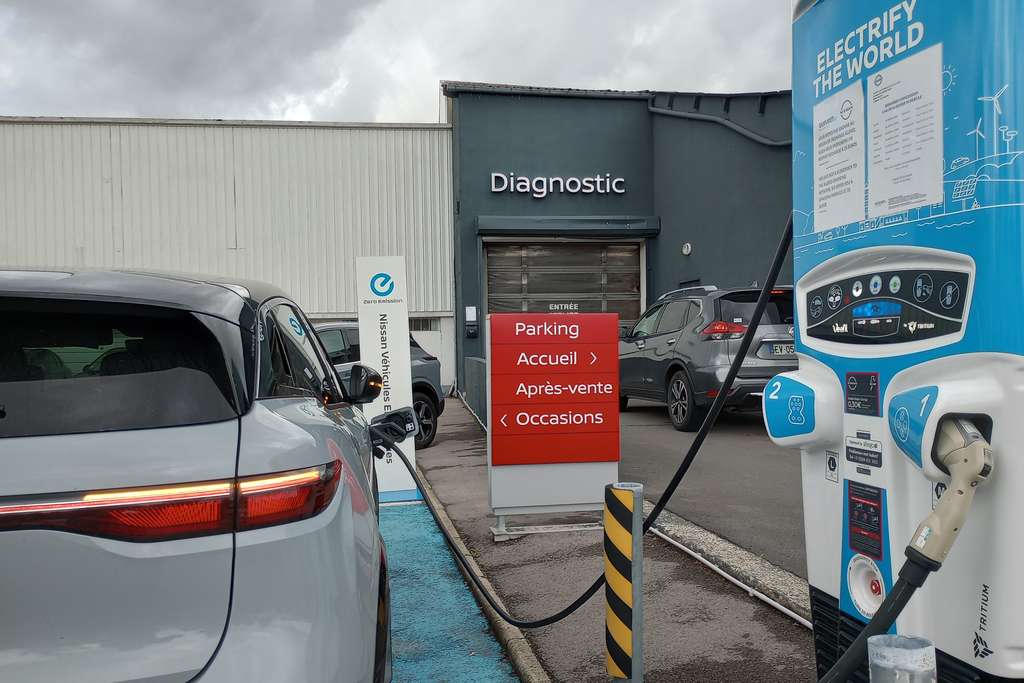 Are you looking for a Renault Megane? Choose from over 30,000 cars on VROOM.be. New and used! Check out our latest Renault Mégane ads now here: