Earlier this month, the Federal Communications Commission (FCC) granted SpaceX permission to use its Starlink satellite internet system in moving vehicles, including cars, trucks, boats and planes. It’s a huge win for SpaceX’s Starlink system, potentially opening up the service to a more diverse range of use cases and customers.

SpaceX sought regulatory approval from the FCC in March last year to allow the use of Starlink Earth Stations in Motion (ESIM) terminals in moving vehicles. To access the system and receive high-speed Internet coverage, customers must purchase a personal terrestrial antenna or user terminal designed to connect to all Starlink satellites in orbit. Until now, these dishes had to be in a fixed location to access the system.

In addition, the FCC fulfilled the request of SpaceX and another satellite company, Kepler Communications, paving the way for a new class of user terminals that can connect to broadband satellites while on the move. In doing so, the FCC chose to reject a petition from Dish Network that sought to stop companies from using the frequency in the 12 GHz band. However, the FCC will continue to conduct analysis as it progresses in developing rules on the presence of ESIM devices in the 12 GHz band and has stated that Kepler and SpaceX will be subject to any future rules they establish.

The FCC argues that approving the new capacity is in the public interest. “We agree with SpaceX and Kepler that it would be in the public interest to conditionally grant their orders,” the FCC wrote in its release, dated June 30. Authorization of a new class of terminals for SpaceX’s satellite system will expand the range of broadband capabilities to meet the growing demands of users who now demand connectivity on the go, whether driving a motorhome across the country, moving cargo from Europe to a US port, or on a domestic or international flight.

SpaceX has made it clear that it wants to expand Starlink beyond just using residential customers. The company has negotiated with several airlines over the use of the Starlink internet service and has reached agreements with Hawaiian Airlines and private jet service JSX to begin providing internet connectivity on their planes within the next two years. Additionally, Starlink has just introduced a special new level of service for RVs, allowing users to connect to Starlink satellites from multiple locations, such as campgrounds or vacation cabins, without an assigned home address for an additional fee.

Starlink currently allows portability for those who pay an additional $25 per month on top of the regular monthly fee of $110. However, portability means the ability to move a Starlink base station from one fixed location to another.

Mobility, on the other hand, is the ability to receive Internet access on the move. While the FCC decision has given SpaceX the green light to offer this feature, the company makes it clear that the service is not yet set up for this scenario: for an additional monthly fee, the portability feature allows users to temporarily move their Starlink to new locations to receive service anywhere on the same continent where Starlink has active coverage.

Using the Starlink kit on the go will void your kit’s limited warranty, please read the current version of the Starlink FAQ page on this topic. While our teams are actively working to eventually allow you to use Starlink from a moving vehicle (e.g. automobile, trailer, boat), Starlink is not yet configured for this type of use.

As other limitations, SpaceX mentioned:

As for adding portability, SpaceX explains:

Ever wanted to work remotely from a yacht but was held back by slow internet? It may be your lucky day (or not): Starlink, Elon Musk’s SpaceX satellite internet service, is now available for boats, the company announced Thursday. 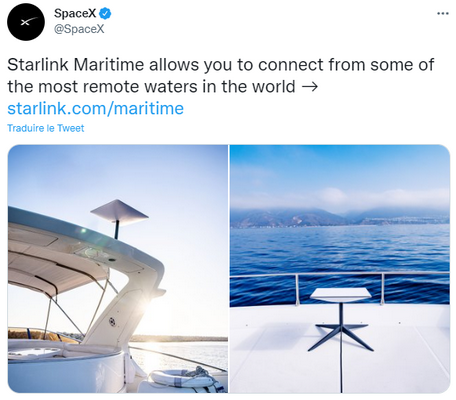 Starlink Maritime quotes $5,000 per month, to which must be added the purchase of two high-performance satellite dishes costing $10,000 in total. A much higher price than the regular residential plan, which costs $110 a month, plus $599 for necessary hardware. But the offer is mainly designed for professionals in the sea.

At that price, the company promises to offer download speeds of 350 Mbps.

In a tweet, Musk clarified the importance of the special pair of terminals, saying they are important for maintaining connection in rough seas and severe storms.

The company claims that Starlink Maritime can withstand extreme weather conditions and is suitable for applications from merchant ships to oil rigs and high-end yachts. She said he uses the service to film SpaceX rocket landings at sea.

If Starlink Maritime is indicated as available now in the US, Europe, Australia, as well as Chile and part of Brazil, only US addresses appear to be eligible for the offer today. From the end of the year, Starlink promises to cover part of the Atlantic Ocean, the Pacific Ocean and the waters of the South Pole. Starting in early 2023, the entire world will be covered by the service. However, access to the service remains subject to local regulatory approvals.

Is this offer really worth taking, or would a simple starlink mobile offer suffice?

A way for starlink to overload boats compared to motorhomes?