Citroën’s new concept car is a new way of looking at the electric car. Far from performance and innovation, but with an assumed ecological consideration.

When it comes to thinking about the future of mobility, Citroën always has good ideas. Two years ago, the chevron brand surprised its world with the Ami, an atypical vehicle both in its shape and in its subscription sales model. This time, the manufacturer of the Stellantis group goes even further by presenting a vehicle that aims to redefine the standards of the automotive industry for years to come. The objective is obviously ambitious, but all-ë or Oli is a concept that has the merit of posing essential questions, in terms of ecological impact and eco-responsibility in the broadest sense. In fact, Citroën’s new concept wants to be a model for its design, its use and its consumption. That’s how it was thought.

With Oli, the first shock is visual. If it takes the form of a compact SUV intended for the family (4.20 m long, 1.90 m wide and 1.65 m high), the Citroën vehicle surprises with its particularly eccentric aesthetic. Halfway between a moon rover and a Lego car, the design revolves around a perfectly flat hood, a straight windshield, and a rear that can be removed to turn it into a pickup truck. This impression of a small hub on wheels is reinforced by the huge 20-inch rims that underline the striking features of the set. Finally, it’s probably not trivial, but Citroën chose Oli to reveal their new logo, as vintage as possible, as it is inspired by their productions from the 1920s. 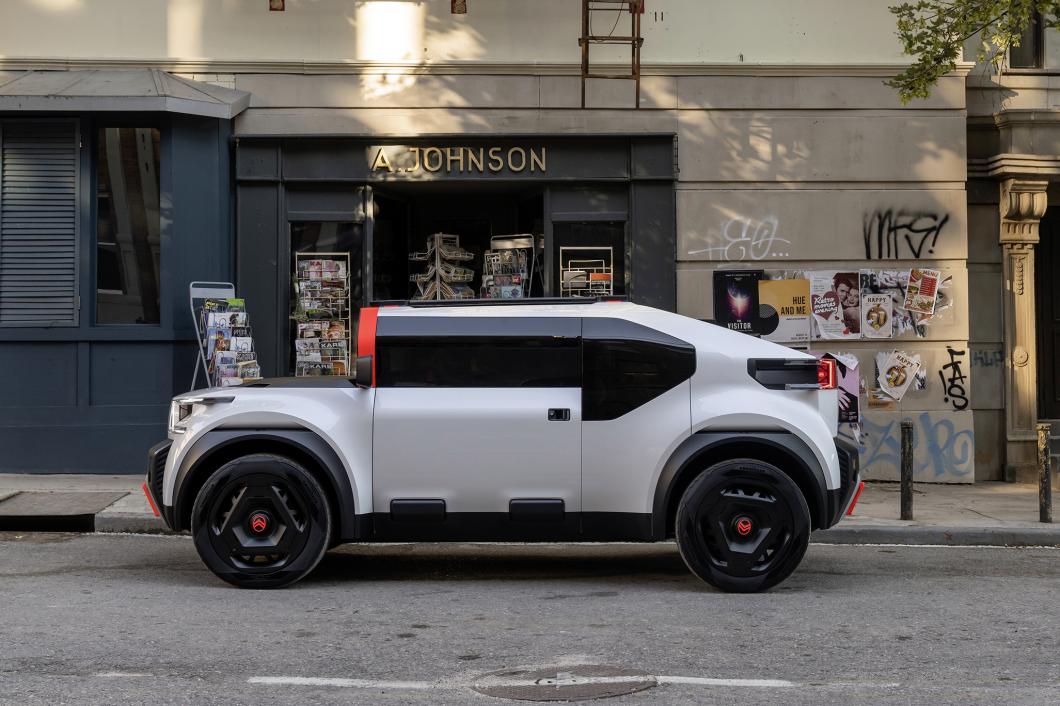 At Oli it is also possible to find some elements of the Citroën pick-up spirit, the same one that gave rise to the buggy version of the Ami. So mounting rails are provided to add accessories as needed.
Even more surprising than its appearance, it’s the materials the Oli is made from that make it a concept on its own. In fact, Citroën’s specifications were very strict. The SUV had to weigh less than a ton. For comparison, current electric SUVs weigh more than twice as much. To manage to lighten its concept because the manufacturer therefore called partners, BASF and Goodyear, in this case, and quite surprising materials.

Will the car of the future be made of cardboard?

In fact, the roof, hood and part of the bodywork are made from recycled corrugated cardboard. It’s obviously a fiberglass and resin reinforced card, but the weight gain is impressive compared to a traditional vehicle. As for the cabin, it is mostly made up of 3D-printed thermoplastic polyurethane-based elements, which would have the advantage of being light and comfortable. Sobriety demands, there is no oversized screen inside the Oli. The driver will simply use his smartphone to display entertainment information. Only one LED strip, controlled by the smartphone, gives access to key information such as autonomy, for example. 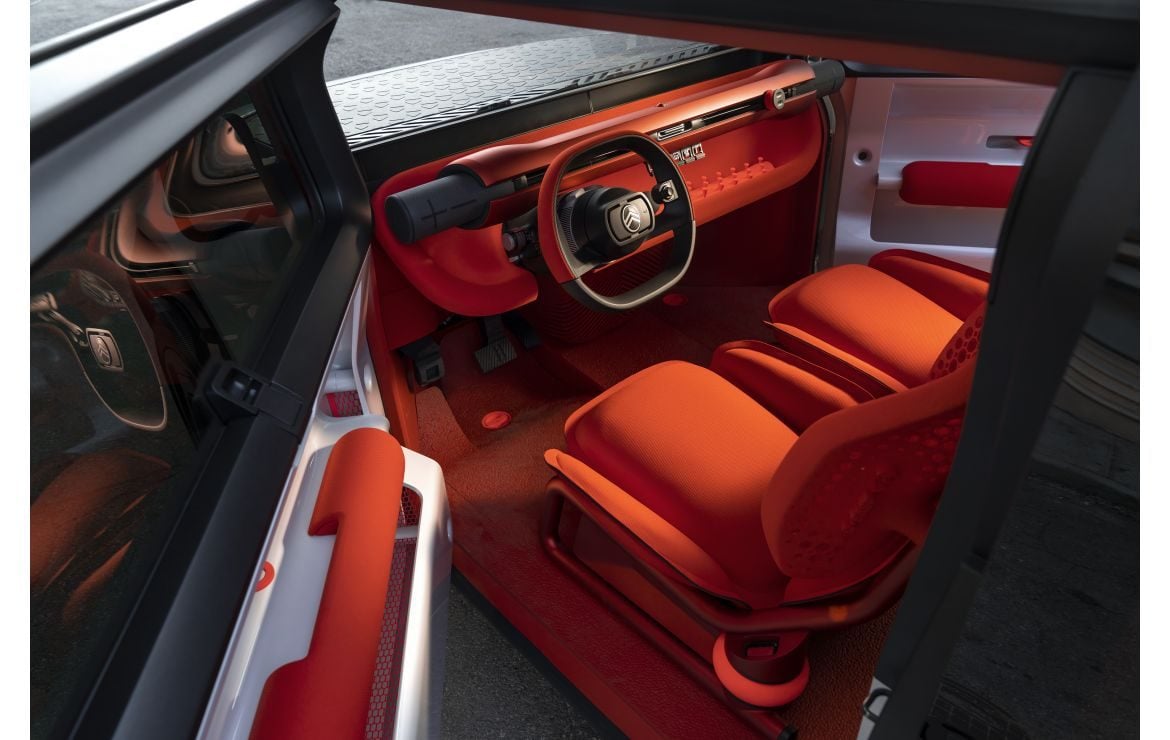 On Goodyear’s side, the Eagle Go solution is in the spotlight on tires. In fact, their tread, made up of 92% renewable materials, makes them an accessory that adheres to the spirit of the vehicle. In addition, they have a sensor to monitor tire pressure and wear.

Reasonable performance for a responsible car

In many ways, Oli could be called Ami in the familiar version. This is the case with the technical part in particular, as Citroën’s concept doesn’t really try to play in the performance field. On the contrary. With a top speed of 110 km/h (is it really useful to drive faster?) and a tiny 40 kWh battery pack, Citroën’s concept car doesn’t promise the moon. However, its limited power and contained weight allow it to get the most out of its accumulator, that is, approximately 400 km of autonomy. 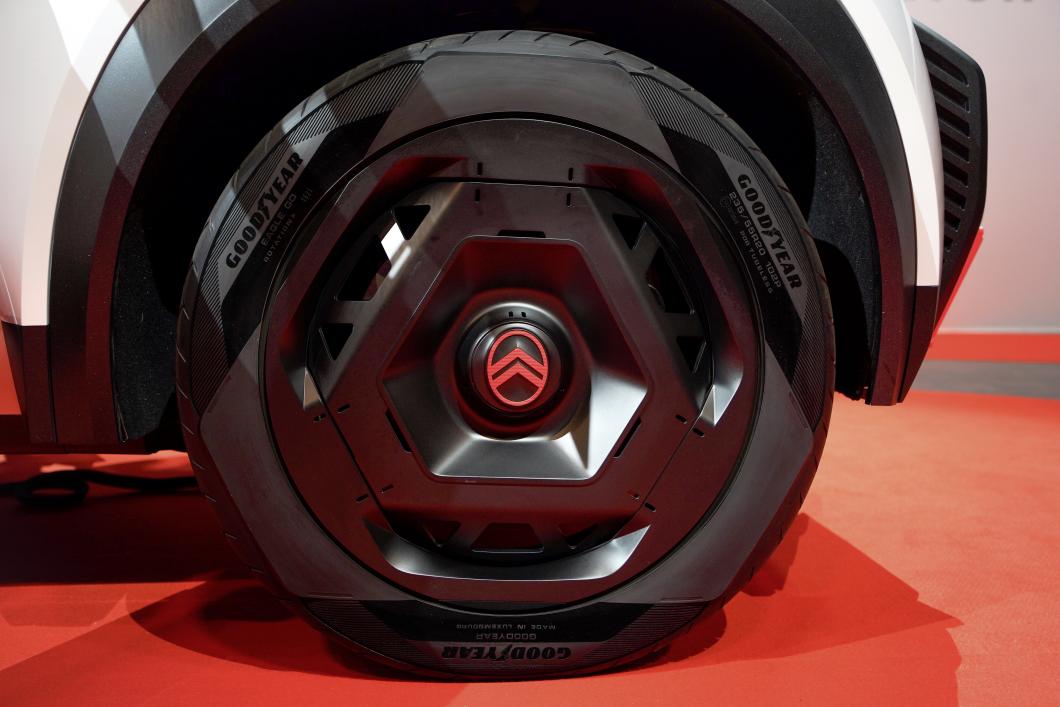 To achieve this result, Oli also allows for a smaller air conditioning system and takes advantage of the reduced size of the windows to reduce the heat inside the cabin.

Finally, Oli’s last eco-responsible argument is in its manufacturing process. While much of the materials are recyclable or made from recycled materials, the various elements of the vehicle are also designed to reduce manufacturing costs. So, as with the Ami, multiple pieces can be installed at the front or back at the same time. Others are used as a mirror, that is, in one direction on the right side of the vehicle and in another direction on the opposite side. Above all, the Oli is devoid of the small parts and buttons that certainly adorn most passenger compartments, but which require a specific approach to their integration. 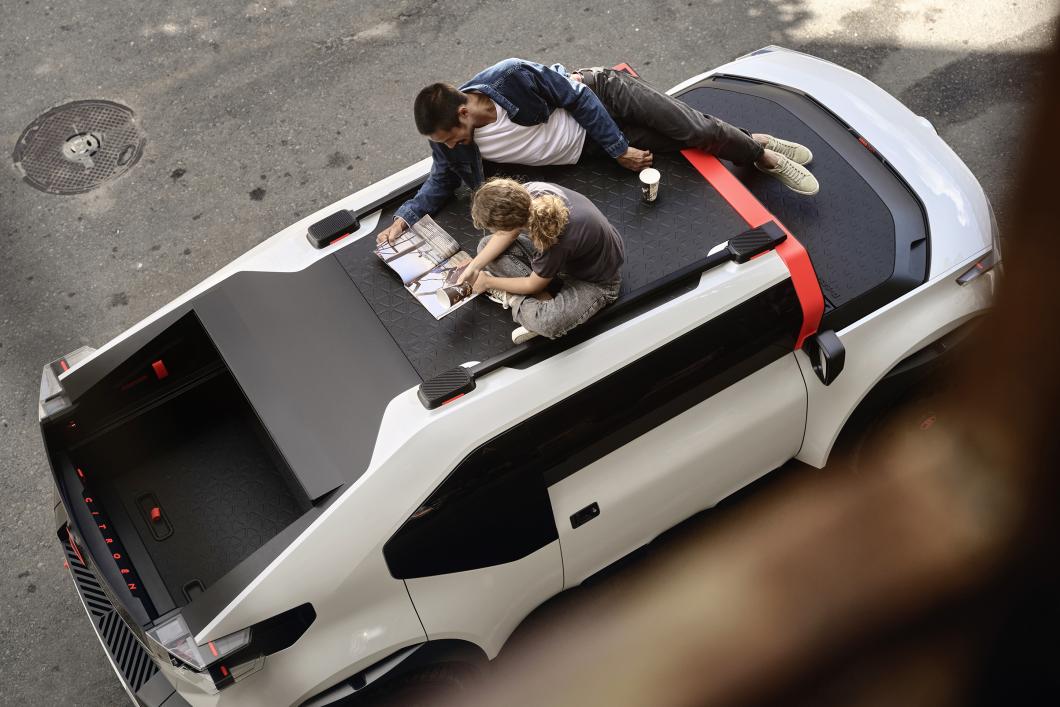 In the end, a question arises: what future for Oli? Citroën’s concept is obviously not destined to see the light of day, but like the Dacia Manifesto, the manufacturer wants to prove that it is capable of producing cars that take into account today’s ecological concerns. It is up to future buyers to show that they are ready to change the paradigm in terms of cars. Because so far, moderation and diminution aren’t really concepts that can be applied to the auto industry. What if Oli had launched a new movement?