Going into space has become a dream accessible to the richest men and women on the planet. But how much does a trip as a space tourist really cost?

They are called Virgin Galactic, Blue Origin, SpaceX or even Axiom Space and if a few have already operated their first publicized test flights, they all announce far-reaching costs to fly their passengers. Space tourism, therefore, will not be democratized for several decades. Space enthusiasts will also remember billionaire Dennis Tito, who made history in April 2001 by becoming the first space tourist to board a Soyuz rocket. A ticket that then cost him 20 million dollars.

In early February 2022, the company Virgin Galactic and its boss Richard Branson announced a $450,000 ticket. A sum that will entitle you to spend just a few minutes at an altitude of 80 km. The principle of this flight, which lasts about 90 minutes in total, is based on a first trip made with an aircraft carrier. Once in the air, he will leave the ship hooked below him in the air. SpaceShipTwo will then start its engines until it reaches an altitude of 80 km, before descending while gliding.

Please note, if you reserve your spot, a deposit of $150,000 will be required. The first commercial flights are expected to take place by the end of 2022, but the first 700 seats are already reserved. Knowing that each flight can only carry six passengers, you will have to be very patient.

Carried by Jeff Bezos on his New Shepard rocket, the Blue Origin company’s project is to send passengers in a capsule at an altitude of more than 75 km. Blue Origin is targeting a price that is expected to top $250,000 per passenger. However, this price has not yet been reached and it currently costs around several million dollars to be among the prime prime movers.

With Blue Origin, the journey is different, as this company has a vertical exit, taking place on the New Shepard rocket. The capsule separates from the lower stage at an altitude of about 75 km and will continue its trajectory until reaching an altitude of 100 km. You will then arrive at the famous Karman line, considered to be the beginning of space according to international convention. The six passengers present will be able to enjoy the weightlessness and admire part of the Earth’s curvature. The return is then made through a freefall phase before landing on Texas ground slowed by three large parachutes and retro-rockets.

Another billionaire involved in the space adventure, Elon Musk, also wants to use his Crew Dragon capsule to take tourists into space. A journey presented under the name of Inspiration 4 and that invites you to spend several days in space and not just a few minutes. So, in September 2021, a crew of two men and two women spent three days in orbit around the Earth. This was a fully autonomous manned flight where passengers never had to take control. The flight would have raised 200 million dollars and if the price of the seats was never communicated, the American media estimates that passengers had to pay between 50 and 55 million dollars. However, they received actual training that lasted several days before boarding, even though they did not receive as extensive training as an astronaut. The sequel is written with billionaire Jared Isaacman, who almost single-handedly financed the first Inspiration4 flight he was a part of. Therefore, it will continue the principle of Inspiration4 with SpaceX under the name Polaris.

The most ambitious project of all, Axiom Space plans to add an extra room to the international space station at an altitude of 408 km. Designed by Philippe Starck, the interior will be able to accommodate eight wealthy residents, as they each had to pay $55 million to stay there for ten days. Additional services can be charged up to $35,000 if they request meetings with ISS astronauts who will be their neighbors. 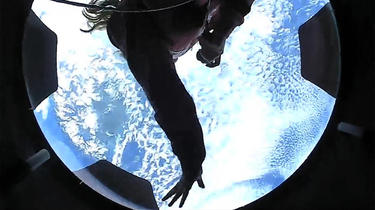 The addition of this new luxury room is expected to take place during the course of the year 2022 if this space program maintains its calendar.