Tech startup Helios announced a partnership this month with Eta Space, a Florida company. The two companies have teamed up to create and store oxygen on the Moon in an attempt to make space missions more cost-effective. They are also determined to eventually provide better supply solutions for the fuels needed during orbital travel.

Helios was created in 2018 as part of an innovation workshop organized by the Israel Space Agency during that year’s Israel Space Week. The company claims to have developed technology capable of producing the oxygen needed for fuel from lunar soil, which will make several long-term missions to the Moon economically viable, as it will allow lunar colonies to “live on Earth” instead. have to transport all your fuel and other Earth resources.

One of the main obstacles to sending missions to the Moon is the cost of transporting objects from Earth to the lunar surface. Launching charged rockets requires fuel; the heavier the load, the more fuel is needed. This extra fuel adds to the weight, requiring even more fuel. Oxygen is a vital component for fuel combustion.

Under the new agreement, Helios will be able to leverage Eta Space’s expertise in cryogenic technologies – and specifically in liquid oxygen and hydrogen – to produce and store oxygen. The two companies plan to jointly develop an oxygen production and liquefaction plant on the Moon.

“Eta Space will play an important role in liquefying and storing the oxygen produced by the Helios reactor in its cryogenic tanks,” explains Dr. the Kennedy Space Center and Cape Canaveral.

“The two companies complement each other in their mission to further reduce costs in space, which is a key initiative to make our presence beyond Earth sustainable,” continues Notardonato, who worked for NASA for 30 years.

Illustration of lunar extractor technology developed by Helios, which the startup hopes to produce oxygen on the moon (Disclosure).

Jonathan Geifman, CEO and co-founder of Helios, believes that “to enable the establishment of a permanent lunar base, the technologies developed by Helios are not enough – you need a whole range of technologies to realize an economic value chain on the Moon. The new collaboration with Eta Space will, for the first time, ensure the link between two purely commercial links in the chain – the production and storage of oxygen – which will make multiple, long-term missions to the Moon more viable.”

Creating a moon base or establishing more recurring trips to the moon, as planned for the next decade by private space companies like SpaceX, could require thousands of tons of oxygen a year to use as fuel. Sending anything to the moon costs several hundred thousand dollars per kilogram — making long-term missions economically unfeasible unless oxygen can be produced on the moon, says Helios.

The process the company has developed is called molten regolith electrolysis and uses a ground-fed reactor. It melts lunar soil at 1,600 degrees Celsius and, through electrolysis, creates oxygen that is stored for use.

The company simulated most conditions on the moon to test its system, using moon-like sand developed by the University of Central Florida based on samples brought back from the moon.

The startup signed a deal last year with European technology multinational OHB SE to provide Helios technology to produce oxygen and metals on the Moon aboard the Lunar Surface Access Lunar Landing System (LSAS). Helios’ technology will fly the first three LSAS missions to the lunar surface starting in 2025, allowing the company to test its high tech under real conditions.

Helios notes that its technology can be used to extract 99% pure iron from iron ore, consuming 50% less energy than currently in the industry. This could lead to better steel production methods, a greenhouse gas intensive industry and the creation of a “green steel industry”. 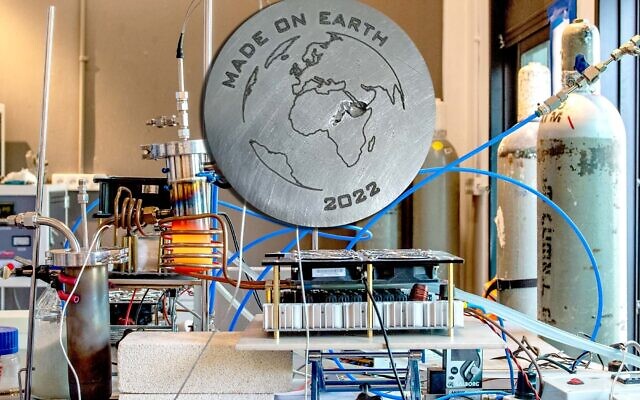 A coin made of “green” iron in a Helios lab. (Credit: Helios)

The start-up, based in Tzur Yigal in central Israel, said it will launch trade deals to build pilot plants that will eventually be able to produce several tons of iron per day and the integration of its technology into the production chain.

Helios received funding from the Israeli Space Agency and the Ministry of Energy. Last month, the company secured a $6 million capital injection as part of an initial round, led by At One Ventures, the “net benefit to nature” investment firm, and Israeli firm Doral Energy-Tech. Ventures. Mataplanet, an investment firm specializing in deep technologyalso participated in this funding round.

Shoshanna Solomon contributed to this article.

That’s what we work for every day: to provide insightful readers like you with relevant media coverage of Israel, the Middle East and the Jewish world. Unlike many other media, our content is accessible for free – with no paywall appearing from the first paragraph. But our work is becoming more and more expensive. That’s why we invite readers, who can and for whom Israel times in French has become important, support us by joining the community of Israel times in French. For the price of your choice, once a month or once a year, you too can contribute to this quality independent journalism and enjoy ad-free reading.