With the Charger Daytona SRT Concept, Dodge aims to go beyond a simple high-performance electric car, adding an unprecedented sporting dimension to this type of vehicle. As ? Through a “multi-speed” gearbox and a soundtrack worthy of the brand’s emblematic models. Too good to be true, or too false to be good?

Without revealing the specs of the “Banshee” powertrain, Dodge specifies that the car is all-wheel drive equipped with “at least” two engines. They must develop 800 hp or more. The electrical architecture is 800 V and will allow fast charging at over 200 kW. To get through all that power, the concept is mounted on 21-inch turbine-looking wheels, while Dodge brought in Brembo for braking with 6-piston fixed calipers.

Dodge gives its electric concept an unprecedented “passionate” dimension with a signature sound thanks to the Fratzonic Chambered Exhaust system. A “gadget” that sends the throaty sound of a good old gas-powered big-block V8 to the ears of the driver as well as passers-by. Dodge announces that the noise level can reach 126 dB, the value of the supercharged V8 of the current Charger and Challenger Hellcat. The manufacturer speaks of a “Dark Matter” sound profile.

However, Dodge does not limit itself to this artifice to remember the unique sensations of driving a traditional Muscle Car as the Charger Daytona SRT Concept is equipped with a “multi-speed” gearbox. Typically, electric cars use a one-speed transmission, or even two speeds in the case of the Porsche Taycan, for example. The eMuscle Car concept would benefit from a transmission with electromechanical shifts that would generate “load interruptions” that would likely “push occupants’ shoulders into the seatbacks” according to Dodge. For even more fun, the steering wheel is equipped with a “PowerShot push-to-pass” button that increases power for a few seconds. 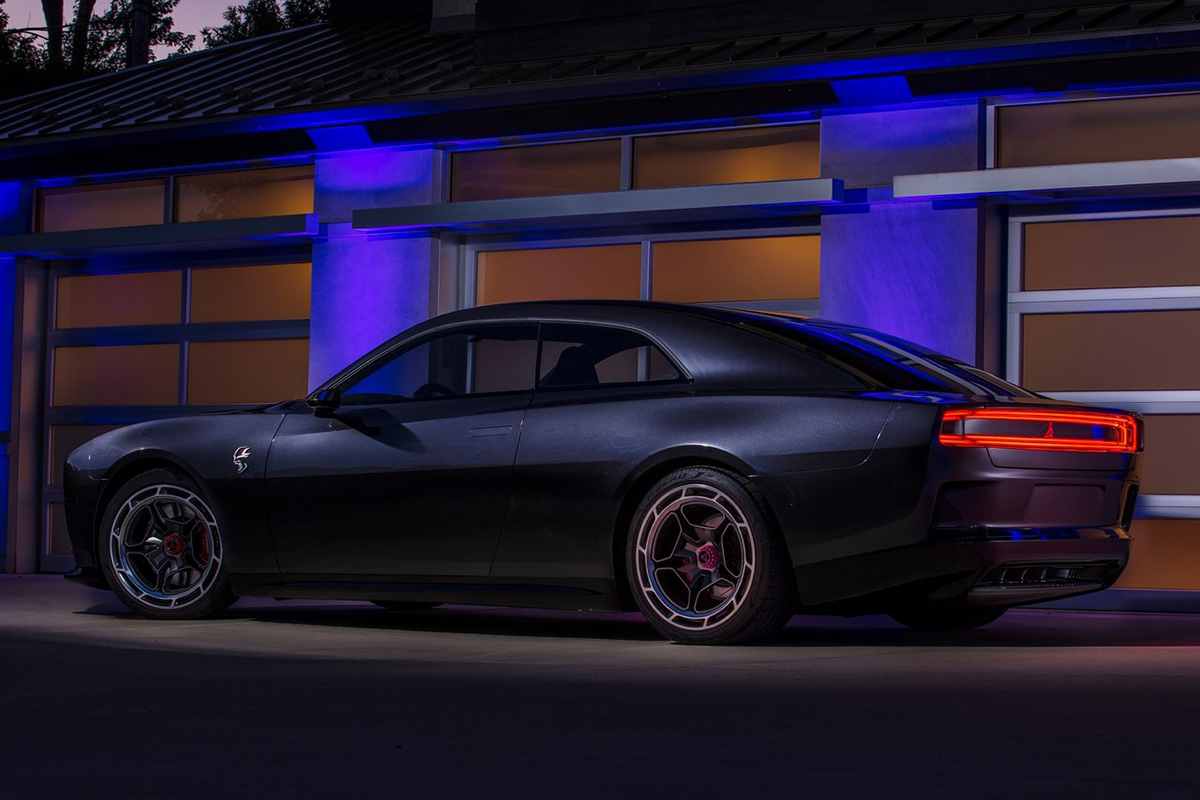 Back to the future

With the Charger Daytona SRT Concept, Dodge pays a strong homage to the Charger dynasty, more specifically targeting the 1968 model in terms of design, while the name refers to the 1970 NASCAR-entered Charger Daytona coupe that was the first car to reach 320 km/h (200 mph) on the track in this competition. While the proportions are reminiscent of the last-gen Charger, the taut lines and distinctive surface play on the sidewalls are a clear reinterpretation of the ’68 Charger, with smooth sidewalls evoking speed and power. The Charger regains a certain elegance that suits him perfectly and finally brings him back to modernity without denying his past. 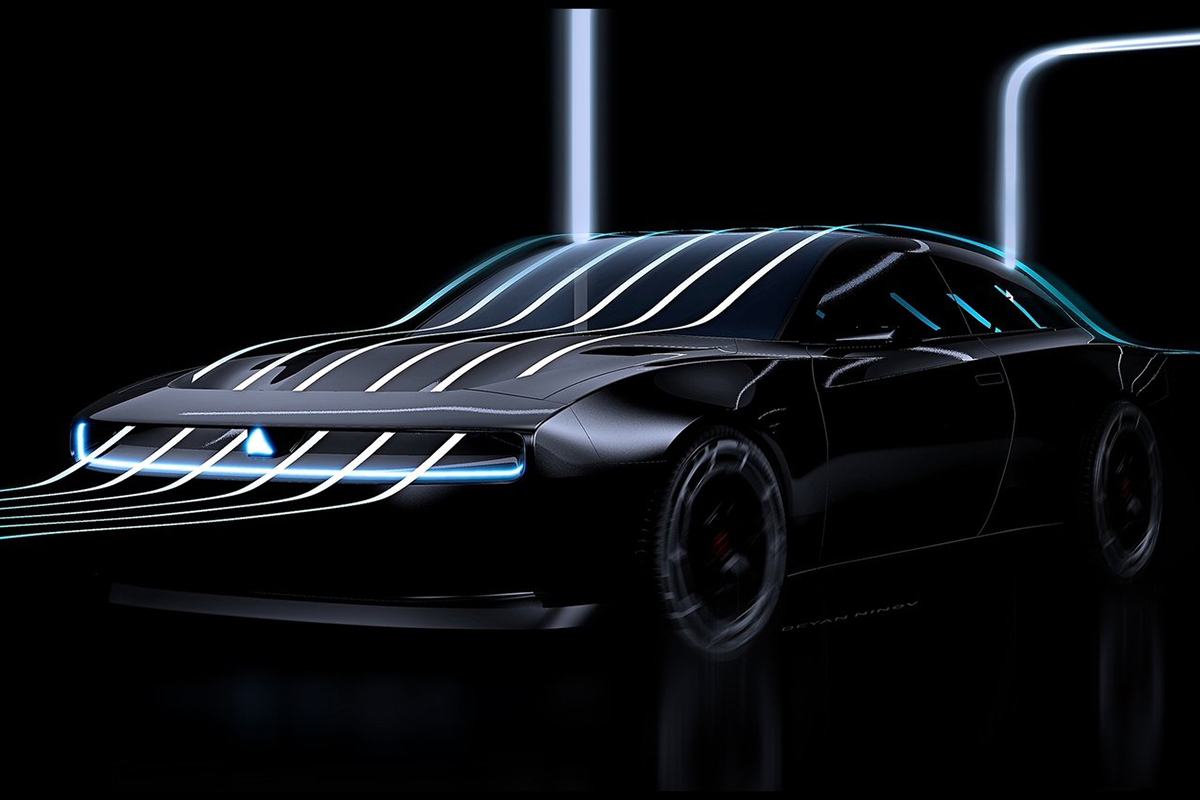 Certain details attest that this Dodge is indeed an electric car. Freed from the bulky V8 thermal, the designers were able to sculpt the front and hood to optimize aerodynamics with a rectangular “grid” that spans the entire width of the vehicle, inserting the optics connected by a thin luminous strip while at its center proudly. there’s a logo inspired by the Fratzog logo affixed to the Dodge from 1962 to 1976. But the real originality lies in the two openings between the headlights and the logo that turn the end of the hood into a spoiler called the R-Wing. A solution we often see in racing cars that optimizes aerodynamic flow for more downforce! The air intakes – in carbon – in the front and rear bumpers create “air curtains” to optimize drag. At the rear, we find the rectangle of the grille, but this time in the form of a double line for the light signature, while the lower part of the shield incorporates a diffuser and Fratzonic letters, in reference to the aural signature of the Charger Daytona Concept SRT!

In the cabin of this 4-seater coupé, each occupant benefits from an individual seat. There are two screens, a 16-inch curve for the dashboard and a 12.3-inch infotainment screen in the center of the dashboard, slightly oriented towards the driver. In the center console, still bulky, is the gear lever, as well as a starter button hidden under a bright red flap at the bottom. The dashboard is marked by ambient lighting that runs its entire width and extends to the door panels, while the logo proudly displays a backlit SRT logo. The trunk has two specific slots for a tailored bag containing the pilot’s coveralls and gloves on one side and the helmet on the other. An entire program.

In absolute terms, Dodge gives us a beautifully designed concept with evocative lines that doesn’t betray its electric vehicle nature. It really is a Muscle Car on a visual level and it should take on this vocation to drive thanks to its soundtrack and its simulated gear changes. As for handling on the road, the high mass due to the battery will be a real downside when you know that the current Thermal Charger and Challenger are anything but lightweight.