APP – An emblematic figure of Malian employers and businesswomen, would you like to introduce yourself more precisely? ?

MI Aïssata Touré COULIBALY – I am an entrepreneur, married and mother of four. I work mainly in the sector of production of fresh fruits and vegetables, mainly destined for the international market of Rungis (France) and some other States of the European Union.

In particular, I am the President of the Association of Women Entrepreneurs of Mali and, in this capacity, the National President of the Network of Women Economic Operators of Mali (which has 6,700 women) and also the Sub-regional President of the Women Economic Operators of the UEMOA space. (Economic and Monetary Union of West Africa), which brings together eight countries, and I represent all these organizations in the Mali Employers’ Association. Three years ago, I was also appointed, by presidential decree, Commissioner of the Justice and Reconciliation Commission and Gender Coordinator. That’s a lot of hats, I agree !

APP – But you didn’t make a career in banking either ?

MI Aïssata Touré COULIBALY – Shortly after my management and administration studies, a large Libyan-Malian bank, BALIMA, now BCS, set up shop in Mali and recruited me. I worked at this large local bank for ten years and gained – I believe – solid experience. But for personal reasons, I resigned because my salary no longer allowed me to support my lifestyle and raise my four children. So I launched myself into the private sector and it was a new adventure, where I discovered entrepreneurship, its rules and its risks.

APP – During the Bamako Forum, which has just taken place at the Hotel Azalaï, you participated in a high-level panel chaired by former Prime Minister Moussa Mara and dedicated specifically to female entrepreneurship…

MI Aïssata Touré COULIBALY – This Forum, which brings together four extremely important elements for our economic life, is perfectly timely, as is this panel dedicated to female entrepreneurship. Listening to each other’s interventions, I found it very interesting to note that we have practically the same problems. Whether in Mali, Cameroon, Senegal or Guinea, female entrepreneurship has more or less the same face. We all face the same problems and the same challenges. And we are all trying to get out of this situation with pragmatism and efficiency so that women can contribute in the best possible way to the economic development of their respective countries.

Banks support companies by granting them loans, but in Mali they are completely wrong and sometimes do so at rates of around 12 %, even 18 %. It is not normal. Banks really need to review their strategy because these fees are exorbitant for all these women who are in the informal sector, whether in agriculture, commerce or crafts. We need products adapted to the profile of our small businesses.

APP – What is your priority to find concrete solutions ?

MI Aïssata Touré COULIBALY – For my part, I believe that the priority is to train young people who embark on entrepreneurship because they often get there by chance and not by vocation. Many of them say to themselves: I don’t have a job, I don’t have a tutor, or I’m divorced, I’m leaving and starting a small business “. But many of them don’t have the slightest culture of entrepreneurship, which makes things even more difficult and complex, as some women touch everything and do several things at the same time without really knowing anything about it. .

So there is a big training deficit. But this seems to me essential and a priority, even before access to finance, which we often talk about. A young woman can’t sit back and say I will export mango » then go to the bank and ask for a loan of 50 million CFA if she doesn’t know what to do with it.

You need a minimum of upstream training and be able to surround yourself with human resources to match your project, because you can be a business manager and not know everything. You have to be able, for example, to hire competent people and put them in the right positions of responsibility in order to develop your business. Business manager, it’s real work and training is the key to 50 % of business success. And I speak from experience because we always have the problem of agents who are not qualified for the work they are asked to do. !

Souvenir photo of the panel that was attended by MI Aïssata Touré COULIBALY, and moderated by former Prime Minister Moussa MARA (in blue). © Handy Photo

APP – Let’s talk about your business. You are, I believe, up your sleeve ?

MI Aïssata Touré COULIBALY – I like horticulture too, and while I don’t talk about it much, let’s start there. I still have 7 hectares of flowers in Mali that I cultivate and some varieties were even ordered from the market in Rungis. I work with wholesalers who can ship production. And I also send some to Mauritania and Niger. On the horticultural side, I employ nine people for a turnover of 300 million CFA per year.

On the sleeve side, my company has fifteen permanent employees and employs around 450” seasonal » for the five-month production campaign that runs from March to the end of July. In volume, this represents 90 tons for mangoes that leave by plane and six containers per month for five months for mangoes delivered by boat. A container loaded onto a freighter can hold 6,000 4 kg cases of mangoes.

“ This embargo makes no sense because everyone
suffers, Mali like its neighbors »

APP – Your business is thriving, but the economic situation in Mali doesn’t look very good…

MI Aïssata Touré COULIBALY – In reality, our businesses – which are small and do not have the financial capacity to support themselves – are all dying. We lived through the 2012 crisis and most of these small businesses that are run by women end up in the informal economy. Even the processing of local products is still artisanal. No company managed by a woman today has an industrial transformation capacity worthy of the name. Our capabilities are weak. And these women can’t go to banks that don’t give them credit because they don’t have collateral.

In handicraft, these women worked mainly with hotels where they sold a lot, mainly in tourist areas, but, due to insecurity, tourism no longer works and, therefore, handicrafts no longer follow. All those women who work with leathers, furs, pearls, jewels, don’t have customers anymore…
Then we spent two years through the Covid crisis and today we are embargoed and the country’s borders are closed !

APP – What exactly are the consequences of this embargo ?

MI Aïssata Touré COULIBALY – The economic sanctions taken by ECOWAS (Economic Community of West African States) on January 9 against Mali are ruining the country’s economy and ruining families. Because, since then, all prices have skyrocketed and wages don’t keep up anymore.

I assure you that in Bamako, in my flower shop opened in the ACI 2000 district, I can go fifteen days without selling a single bouquet. ! Because there’s no more money and what little we earn goes into the shopping basket. All prices soared, including those for basic necessities like millet, rice, fonio, which practically doubled or increased by at least 50 % ! Nobody has the brains to put money in flowers anymore…

APP – How, under these conditions, can the Malian economy withstand ?

MI Aïssata Touré COULIBALY – Good question, but honestly I don’t have the answer. It’s unsustainable. I created my company Multichem in 1995 and for the first time I am putting some of my agents on technical unemployment. You can see what it means for all these families if the head of the family no longer has a job…

Unfortunately, many companies are in the same situation. It is extremely serious what our companies are going through today. The only hopeful note would be for this embargo to be lifted because the vast majority of these women are traders trading cross-border with our neighboring countries such as Senegal, Mauritania or Côte d’Ivoire. It is this incessant back and forth that keeps commerce going and the economy of our various countries going. However, as the borders are closed, these women do nothing else. This embargo makes no sense and everyone suffers from it: Senegalese and Ivorians like Malians !

I dare, therefore, to hope that on the occasion of the next ECOWAS Extraordinary Summit, on June 4th in Accra (Ghana), our leaders will become aware of this, overcome their political quarrels to gain height, have mercy on our peoples and save our collapsing economies. I hope so with all my heart. 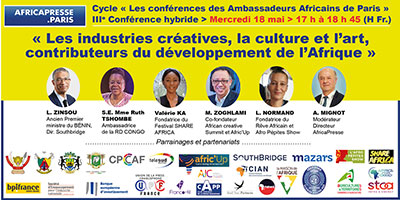 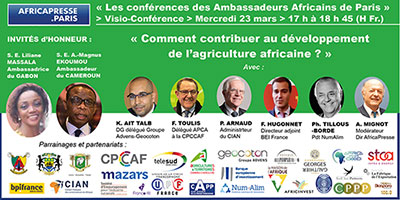 CMAAP 2 / REPLAY – “ How to contribute to the development of African agriculture ? “, with noI Liliane MASSALA, Ambassador of Gabon, and HE André-Magnus EKOUMOU, Ambassador of Cameroon 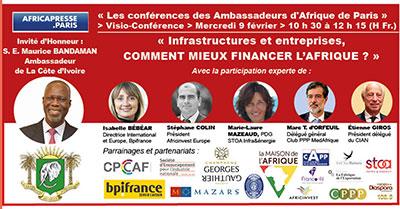 CMAAP 1 / REPLAY – “ HOW TO BETTER FINANCE AFRICA ? », with HE Maurice BANDAMAN, Ambassador of Ivory Coast »

CLICK HERE
and directly access the complete archive of our MONTHLY AFRICAN AMBASSADORS CONFERENCES IN PARIS (CMAAP), with REPLAYS and articles.