The greenwashing risk indicator provides information on the credibility of companies’ ESG commitments.

Developed within the scope of the ESG Covalence rating agency, the greenwash risk indicator allows measuring the exposure of portfolios to the greenwashing risk and provides information on the accuracy, transparency and credibility of companies’ sustainability commitments.1. As of April 30, around 1,200 companies out of the more than 13,000 monitored (9%) are at risk of greenwashing in at least one of the three pillars Environment, Social, Governance.

While sustainable investing represents 37% of assets under management worldwidetwo, allegations and fears of greenwashing in finance are heard frequently in different circles: academics, NGOs, governments and international organizations, market surveillance authorities, but also among asset holders and investment professionals. Therefore, it is important that these concerns are taken seriously.

In the environmental dimension, the most frequent situations of risk of greenwashing concern energy and materials.

The greenwashing risk indicator is calculated using media data, positive and negative news published by the media and other stakeholders and allows you to calculate a reputation score through sentiment analysis. First, this data is labeled with forward looking elements (keywords like “net zero”, “commitments” or “goals”, future dates, quantities and units of measure). This tag helps to separate media data into two groups: prospective data and retrospective data. The first describes the companies’ sustainability commitments, goals and ambitions, while the second covers more of their past achievements, legacies and controversies.

When the two sentiment scores are similar, the risk of greenwashing is considered low and the commitments credible, consistent with data describing the past.

When forward-looking sentiment is greater than hindsight, a medium or high risk of greenwashing is identified, signaling potential discrepancies between companies’ announcements and their actual practices.

Switzerland is the country that most registers situations of risk of green silence in the social and governance dimensions.

When the prospective score is lower than the retrospective score, the risk of greenwashing is negative: we are facing a risk of green muting, indicating a lack of commitments due to the absence of a sustainability strategy, a posture of concealment (voluntary green silence); this situation may also be due to compromises made inaudible because they are often or systematically associated with controversies (forced green silence).

In the environmental dimension, the most frequent situations of risk of greenwashing concern energy and materials (metals and mines, gold, steel). Considering the risk of green silence, the most exposed industrial groups are insurance, media and entertainment and diversified financial services: in these sectors, companies are tempted to adopt a low profile in terms of sustainable development strategy (voluntary green silence). Within the sub-industries, tobacco stands out: the environmental commitments of tobacco manufacturers are often mentioned with negative comments related to the health impact of their products, which has the effect of stifling these commitments, making them inaudible (forced green silence).

In the social dimension, the industrial groups most at risk of greenwashing are automakers, transport (airlines, maritime transport) and food and basic products retailers.

Figure 1: Greenwashing risk indicator calculated for a company in the mining sector 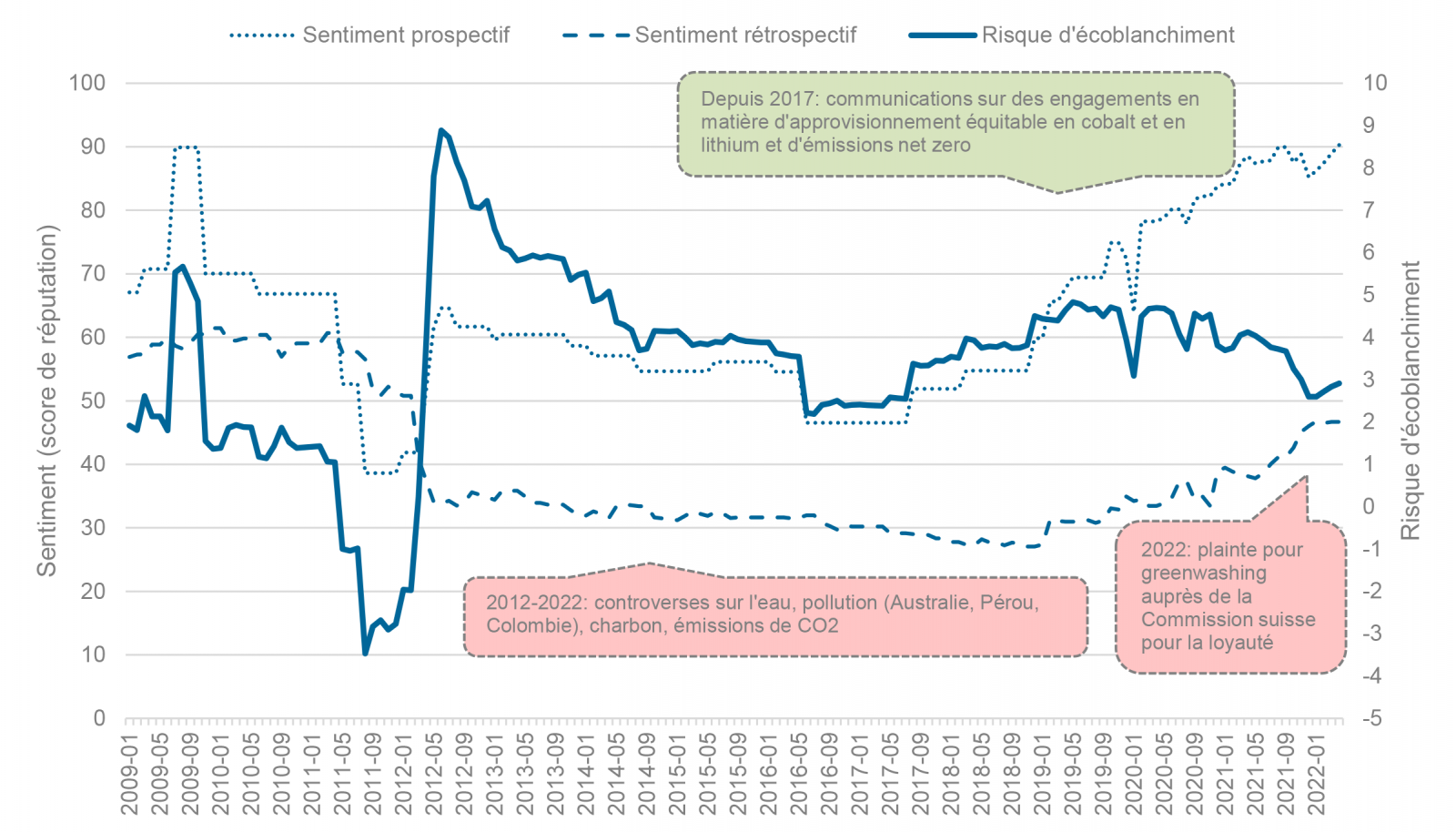 As in the environmental dimension, insurance appears at the top of the list in terms of risk of green silence in the social dimension. One way to interpret these results: insurance, telecommunications services and diversified financial services see themselves as companies less exposed to ESG risks, as “low footprint” companies and, therefore, remain cautious and discreet in their commitments in terms of sustainable development .

Australia-based companies have the highest number of greenwashing risk occurrences in the Environment dimension. Switzerland is the country that most registers situations of risk of green silence in the social and governance dimensions. Swiss green silence is voluntary and not forced. Two potential explanatory factors: politically, Switzerland tends to focus on the environmental and economic pillars of sustainability to the detriment of the social pillar; culturally, certain traits of Swiss identity, such as pragmatism, prudence, discretion and modesty, do not favor the expression of ambitious commitments and goals.