With more than 180 satellites already in orbit for a total that could reach 42,000 by 2030, Starlink is now one of the most ambitious private space programs of the decade.

With this megaconstellation of telecommunications satellites, SpaceX intends to bring Internet access to all parts of the globe. However, several voices are concerned and fear a disaster scenario close to that imagined by Donald J. Kessler who imagined in 1978 an exponential increase in low-orbit debris thus preventing the possibility of exploring space for several centuries.

It should be noted that during the next ten years, admiring the stars and the celestial vault will allow you to see a real “cosmic train”, under certain conditions. This was already the case last December in Aude, where several residents witnessed the trail of light reflected by a hundred Starlink satellites. If this is not new and not even regular, this kind of observations must nevertheless become even more common.

And the sky of the future seems full of many “traffic jams” beyond the clouds. While Earth currently has more than 2,200 active artificial satellites in orbit (5,360 including those that no longer function), space projects of this type could add more than 57,300 in the future, or 26 times more if we rely on frequency requests filed by satellite operators. FCC (Federal Communications Commission) and the International Telecommunications Union.

Figures to put in perspective

However, this number must be put into perspective. Because there won’t be that many in orbit. “In reality, operators prefer to register as many frequency requests as possible to ensure that they have at least one for each of their satellites, which is mandatory when you want to put a telecommunications satellite into orbit. Once a frequency has been assigned, the operator is sure to be able to keep it for five years, but if the satellite is not launched, it is lost and can potentially be recovered by a competitor”, underlines Christophe Bonnal, senior expert at the CNES board. of launchers.

Because of the 12,000 objects of the Starlink network, SpaceX has submitted a frequency request to launch 30,000 more if this market estimated at several billion euros works well, to which it will be necessary to add the nearly 2,000 planned through the OneWeb project, as well as the 3,200 from Amazon’s Project Kuiper. The objective is, therefore, to cover almost 100% of the earth’s surface to offer very high speed access to the most remote places on the globe, without going through a traditional wired network. 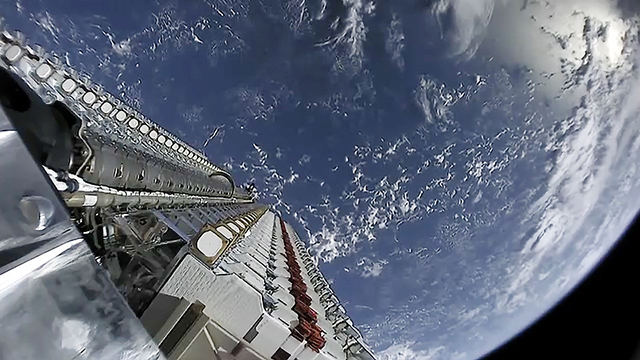 However, these ambitious projects do not fail to raise new problems. The most visible of these, but not the most worrisome, concerns the work of astronomers, whose observations can be interrupted by space debris. Finally, another sensitive subject also evokes all the legal problems that follow.

Starlink satellites during a meteor shower on November 22. pic.twitter.com/wJVk1qu49E

On the night of November 21-22, several voices were raised among astronomers looking to observe a shower of shooting stars, spoiled by the observation of Starlink satellites that streaked the celestial vault (as shown in the video below). Since then, several scientists and astrophysicists have raised the alarm, fearing that in the future their observation work will be totally polluted by these megaconstellations.

Flying in low orbit, they can actually reflect sunlight and greatly complicate the task of observation. Even so, the astronomers’ struggle will not be able to triumph in their favor, at least on the legal level: “there is no rule in the matter, they can complain, but they can’t do anything”, comments Julien Mariez, head of the CNES legal service. Only efforts can be expected from operators. This is how SpaceX recently launched a satellite painted black to test whether it was less cumbersome than other Starlink satellites. In addition, discussions are underway at the international level to alter the reflectivity of satellite structures.

The thorny problem of collisions

The subject intrigues as much as it worries. What if all these satellites end up colliding and their wreckage sets off an uncontrollable chain reaction? If the matter may seem alarming, again this point must be put into perspective, although that probability is never zero.

Operators must follow a code of good conduct and demonstrate that they are able to follow five basic rules: it is prohibited to deliberately generate space debris, everything must be done to avoid exploding in orbit, a satellite must not remain more than 25 years in a low orbit (below 2000 km altitude), avoid collisions as much as possible and avoid killing someone on the ground during precipitation.

“When compiling their file to obtain their frequency, operators are careful to demonstrate that they are capable of maneuvering their satellites both to avoid internal collisions between their own satellites and also to communicate with other operators to carry out evasion maneuvers between them. , underlines Christophe Bonnal. In 2018, the experts responsible for this issue based in Toulouse recorded no less than 3 million messages of reconciliation in this regard.”

The trickier problem is actually getting these megaconstellations into orbit. “We must raise these satellites and lower them and they can cross other space objects, like the international space station, for example”, recalls Christophe Bonnal. SpaceX has notably chosen to deploy its satellites at an altitude of 550 km, enough to cross the ISS. “To facilitate the ascent, they are first launched into low orbit, with the idea of ​​checking their operation and, if all is well, they are raised to the intended altitude”, he specifies.

However, SpaceX boss Elon Musk was very keen to stay 350km away. A choice that can prove tactical in this telecommunications market, since by installing a fleet of satellites at this altitude, the famous billionaire can save a few milliseconds for Starlink to communicate with Earth. Enough to take advantage of a technology that could beat the competition at the post, when it comes to financial organizations being as quick as possible to place their purchase orders within an increasingly connected stock market. A choice that could become the sinew of war, especially when we know that its first rival, OneWeb, chose to place its constellation in an orbit of 1,200 km.

Towards new French regulations by 2022

At the same time, megaconstalations pose new legal questions for international law. “These projects emerged very quickly, but the implementation of a law on the subject takes time. Currently, he there are few technical constraints specific to the constellations imposed by States on their operators“, notes Julien Mariez, who stresses that France wants to complete its space regulation in this area by 2022, in order to impose clear technical rules.

“At the same time, the United States is quite virtuous in this matter,” he adds. The risk is, therefore, to find ourselves facing less virtuous countries, that would allow operators to operate constellations without any real technical requirements“There is, therefore, an issue of international regulation. “The UN must implement applicable international law, but it is difficult to find consensus and impose binding rules. Therefore, it is necessary to imagine consensual guidelines that are followed”, he explains. “Many simulations they were made to avoid collisions and if the operators of these constellations respect international rules, this should not be a problem. All these actors must be empowered”, concludes Christophe Bonnal.